Worldwide study shows COVID vaccines and boosters reduced the risk of severe COVID-related disease in pregnant women by about 76%. 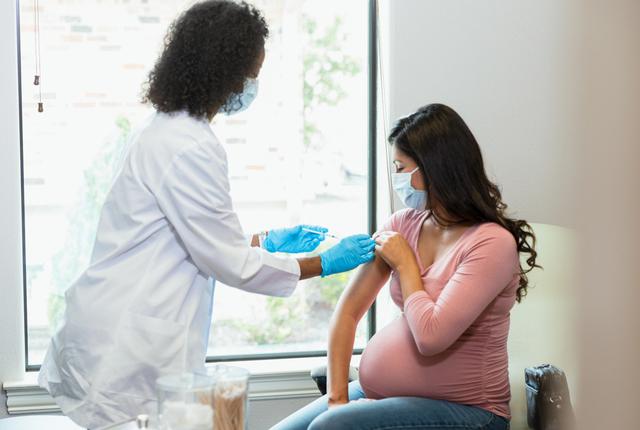 Getty Images
The main take-away from the study, which was completed before other variants emerged, is for pregnant women to get vaccinated and receive all their boosters, including the bivalent booster.

COVID vaccines and first boosters provided significant protection to pregnant women against severe complications and death, even after the arrival of the new Omicron variant, according to a study published this week in The Lancet medical journal.

This study “demonstrates a vaccine effectiveness in preventing severe complications of severe COVID-19 of 76% following vaccination and at least one booster,” said Dr. Michael Gravett, an OB-GYN with the University of Washington School of Medicine who participated in the study, which was led by Oxford University. “Given the marked increased in maternal mortality and severe morbidity seen in our earlier studies prior to vaccination, the 76% efficacy is pretty impressive and really points to the need to get women vaccinated.”

The main point of the study, which was completed before other variants came on the scene, is for pregnant women to get vaccinated and receive all their boosters, including the bivalent booster, he said.The bivalent booster contains components targeting the original strain of the virus as well as a component of the Omicron strain, which emerged in late 2021.

The study was conducted between Nov. 27, 2021, and June 30, 2022, during which time the highly transmissible Omicron strain began to rapidly spread around the world. The study did not include the impact of vaccines and the second booster or the bivalent booster on later mutations of COVID-19.

Vaccinated women were well-protected against severe COVID-19 symptoms and complications and had a very low risk of admission to an intensive care unit, the study found. Full vaccination with a booster conferred the greatest protection, the the researchers noted.

COVID-19 infection during pregnancy was associated with increased risks of maternal morbidity, severe pregnancy complications, and hospital admission, especially among symptomatic and unvaccinated women. In particular, among unvaccinated women who developed severe COVID-19 symptoms the risk of pre-eclampsia was more than threefold higher than that of women without infection. Obese or overweight women with severe symptoms were at the highest risk for maternal morbidity and severe complications.

Although much of the general population has become less concerned about new variants, pregnant women, especially unvaccinated pregnant women, should not take that attitude, Gravett said.

“If you look at unvaccinated women, you still have an increased death rate, and increased neonatal mortality,” he said. “If you are vaccinated and boosted, especially with a mRNA vaccine, those levels drop by 81%.”

In addition, researchers found no increase risk of vaccine side effects in mothers, fetuses or newborns and a decrease risk of preterm birth among vaccinated women.

“Bottom line is we need to do a better job for women who may become pregnant, and make sure they receive the vaccines and the bivalent boosters,” he said.

The next study will likely follow up with mothers and babies who received the vaccines and those who did not, Gravett said.