Andre Berndt is recognized by the 2022 McKnight award for work that “fundamentally changes way neuroscience is conducted.” 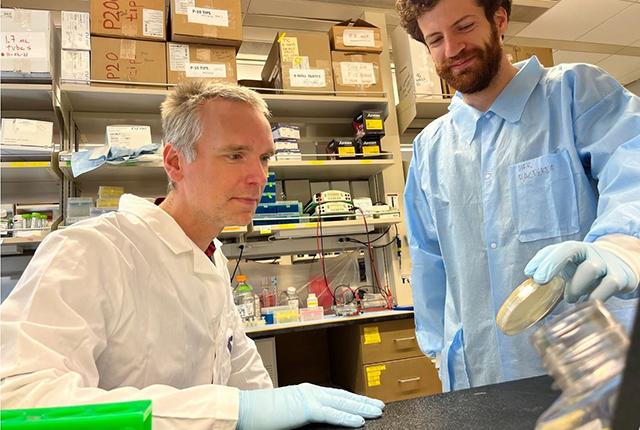 Andre Berndt, assistant professor in the Department of Bioengineering, University of Washington in Seattle has received the 2022 McKnight Technological Innovations in Neuroscience Award for work that “fundamentally changes the way neuroscience is conducted.”

Berndt is one of three researchers this year to receive the $200,000 award given by the McKnight Endowment Fund for Neuroscience. His team was recognized for developing a rapid way to identify and optimize molecular tools called biosensors, which have been a major advance in the study of brain function.

“Traditional testing methods typically require months if not years of laboratory work,” Berndt said. “We’ve developed a system that can screen 10,000 biosensor proteins in an afternoon, allowing you to rapidly ‘pick a winner’ that has the characteristics you want.”

Biosensors are engineered molecules that can detect and measure levels of different substances. Typically they comprise a biological molecule, such as a cell receptor, linked to a molecule that generates a detectable signal.

Berndt’s work focuses on the development of biosensors to study brain activity and neural circuits.  Recently, he and colleagues have worked with a biosensor that fluoresces when it interacts with the neurotransmitter dopamine.

Researchers seeking to optimize the dopamine biosensor have focused on a four-amino-acid loop that links the receptor and fluorescing proteins. Previous work has shown that biosensor molecules with some amino-acid sequences in this loop structure are more sensitive than others. The problem is determining which sequence would be best. With four locations and 20 amino acids, there are 160,000 possible combinations. Current methods would require decades to test that volume.

Berndt and collaborators call their new method the Optogenetic Microwell Array Screening System. The approach starts by using polymerase chain reaction to create millions of genes for the biosensor in which the DNA sequences for the four-amino-acid loop are generated randomly. As a result, all possible combinations of these amino acids will be produced.

The genes are then inserted into small circular strands of DNA called plasmids, which insert the genes into cells. The cells’ genomes have been altered so that there is only one spot where the gene can be inserted and be expressed. This means the cells can produce only one plasmid’s version of the biosensor protein even if more than one plasmid enters the cell.

The resulting cells are applied to a silicon plate into which a grid of microscopic wells have be molded. These wells are 35 microns deep and 30 microns across — just room enough for a single cell. As a result, after processing, each plate holds 3,600 cells arrayed in a carefully calibrated grid.

The cells are then exposed to dopamine and the plate placed in a detector and exposed to light. The cells with the best four-amino-acid combinations fluoresce better than those with less optimal combinations. Cells with the desired fluorescent characteristics are collected and their genes sequenced, revealing their four-amino-acid sequences. Genes containing the optimal sequence can then introduced into brain cells, which will produce the fluorescing biosensors, and their dopamine activity can then be studied.

“Right now, we’ve been focusing on the loop, but we can extend this approach to study other regions of the biosensor protein that affect its characteristics,” Berndt said. The same technique can be also used to identify and optimize other biosensors, he said.

With funding from the McKnight ward, for example, Berndt will focus on opioid receptors, testing and refining 750,000 biosensor variants to better understand how opioids affect the brain.

The Minnesota-based McKnight Foundation was founded in 1953 by William McKnight, an early executive at the 3M corporation, and his wife, Maude.