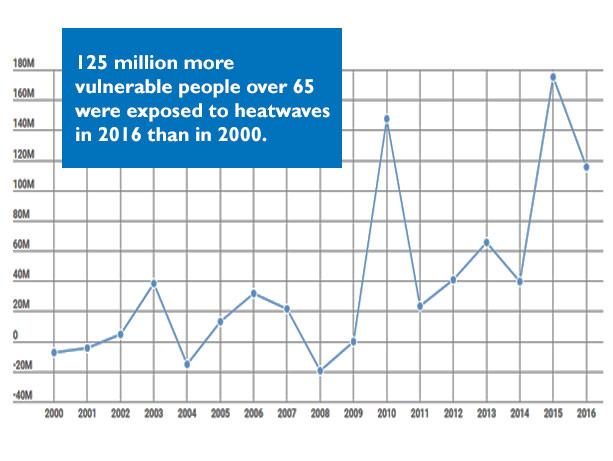 The Lancet
The chart shows how heat has increasingly endangered vulnerable people over age 65.

New research from 26 institutions, including the University of Washington School of Public Health, points to climate change as a looming public health emergency. But experts also note that an accelerated response over the past five years has created “clear and unprecedented opportunities for public health.”

Howard Frumkin, UW professor of environmental and occupational health sciences, was one of the few U.S. authors for the global report.

“Climate change threats to health are not far off in time or space,” he said. “They are here, now, ranging from catastrophic storms to severe heat to more infectious diseases to longer allergy seasons.  The situation is urgent.”

Among the report’s findings:

Despite slow progress, experts cited encouraging signs. The potential benefits and opportunities of responding to climate change are staggering, they said, and could lead to cleaner air, safer food and water, and more nutritious diets.

“Cities across the country are stepping up with effective heat action plans, to protect their most vulnerable citizens during heat waves,” Frumkin said. “Similarly, our nation is shifting our energy supply, with less reliance on coal, the most serious contributor to climate change, and more reliance on renewables such as wind and solar.  This reduces the carbon intensity of our economy—and in health terms, that means preventing many serious health threats.”

Research partners included the World Bank, World Health Organization, University College London, Tsinghua University, and the University of Colorado-Boulder. Together with 20 other organizations, they formed the Lancet Countdown: Tracking Progress on Health and Climate Change.