Stimulating the brain to rewire and repair

Stimulating the brain to rewire and repair

Researchers hope to use brain stimulation to create new neuronal cell networks to restore function lost due to stroke. 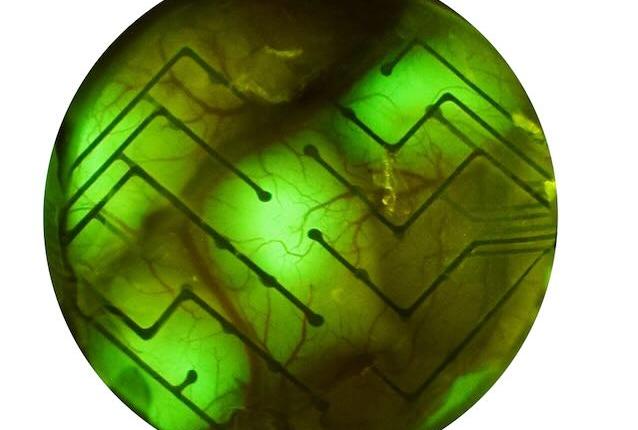 Of the more than 795,000 Americans who will experience a stroke this year, one in four will be severely disabled. While physical and occupational therapy can help survivors regain some lost function, many will remain unable to perform many basic activities of daily living.

Stimulating areas of the brain with electrical or magnetic pulses has been shown to induce brain cell networks to rewire their connections. This raises the hope that it might be possible to  restore function by rewiring brain networks damaged by stroke or other neurological disorders.

“The question is: Can we stimulate the brain to induce targeted reorganization, removing or weakening deleterious connections, inducing new connections or strengthening impaired connections that have been damaged?” Yazdan-Shahmorad said.

She has assembled a team of collaborators to better understand how the brain rewires in response to stimulation and how that ability could be used to treat brain damage and disorders. The complex task requires expertise ranging from genetic engineering to brain surgery, brain-machine interfaces, artificial intelligence and neuroethics. Among her collaborators are Maysam Chamanzar at Carnegie Mellon University, Jialing Liu at University of California, San Francisco, Alik Widge at University of Minnesota, and at the UW, Eberhard Fetz, Zaid Harchaoui, Eric Shea-Brown, Ali Shojaie, Arka Majumdar, Raj Rao, Eli Shlizerman,Tim Brown and Beth Buffalo.

“The brain is a complicated organ of billions of interconnected neurons, and, in many ways, it is a black box about which we have little understanding,” Yazdan-Shahmorad said. “What we’re trying to do is develop tools that will allow us to open up this black box so we can understand how it works and how to stimulate it to rewire in safe, targeted way that avoids off-target effects.”

To map individual brain networks and study how they respond to stimulation, Yazdan-Shahmorad and her colleagues are trying to target circuits as precisely as possible to be able to record changes in cells’ connections in response to stimulation over time. To do this, Yazdan-Shahmorad and her colleagues combine genetic engineering with a tool they call a “smart dura.”

The genetic engineering involves a technique called optogenetics in which genes are introduced into cells to cause them to produce light-sensitive proteins. These can then be easily switched on and off by shining a light on the cells. In her work, Yazdan-Shahmorad introduces a gene into brain cells for a light-sensitive protein that forms ion channels in the cell’s outer membrane. When light is shone on the cells, the channels open. This allows ions to flow cross the membrane, thereby causing the neurons to fire. When the light is turned off, the channels close, and the cells stop firing.

Using optogenetics to stimulate brain cells gives the researchers much more control than is possible with earlier methods like electrical or magnetic stimulation. Researchers can now target a much smaller area of the brain and even tailor the technique to target specific cell types within that area. This allows them to manipulate the activity of different cell types within the same circuit.

Yazdan-Shahmorad and her colleagues at Carnegie Mellon University are developing the "smart dura" monitoring device for use after the optogenetic genes are introduced into an area of the brain. The dura is a membrane that covers the brain. The smart dura replaces the native dura. It has a clear membrane that overlays the brain. A light can be shone through this membrane. An array of transparent sensors is incorporated in the smart dura. These sensors can record brain activity over a relatively large area, about 5 cm2.  The device enables the researchers to use patterns of narrow light beams to activate very precise areas of the optogenetically treated brain. They then record the activity of neurons from nearby networks that are affected by the stimulation.

In their initial experiments in animals, Yazdan-Shahmorad and her collaborators studied the effects of stimulation on networks connecting two key areas of the brain’s cortex. These are the motor cortex, which generates the nerve signals that control muscle movement, and the primary somatosensory cortex, which processes sensory information from the body, such as touch and temperature.

The experiments showed that stimulation of neurons in a small portion of the motor cortex activated networked neurons in the wide area of the somatosensory cortex. They also found that repeated, precisely timed stimulations strengthen some connections and weakened others. This demonstrated that they could remodel these networked connections with the optogenetic stimulation.

The finding also supported what is called the Hebbian learning model, named after the neuroscientist Donald Hebb who first proposed it. The model says that the brain learns because networked neurons that fire in tandem in rapid succession tend to strengthen their connections. This idea was distilled to the saying: “Neurons that fire together, wire together.” Conversely, for neurons that do not fire in tandem or fire randomly or with significant time between each other, the connections will weaken. While previous experiments have supported the Hebbian postulate, this experiment demonstrated the principle can be observed at work in large-scale circuits that neural interfaces like the smart dura are able to monitor.

Ultimately, Yazdan-Shahmorad hopes techniques developed by her research can help in treating stroke survivors by mapping exactly which brain-cell networks have been damaged. Then stimulation would be used to create new connections that repair or bypass the damage.

“What we’ve demonstrated in our current work is you can study these networks at a high level of resolution, which you will need to do if you are going to understand what kind of changes you are likely to see with stimulation,” she said, “But, so far, we’re just scratching the surface.”