Ride a scooter helmet-less? Maybe get your head examined.

Ride a scooter helmet-less? Maybe get your head examined. 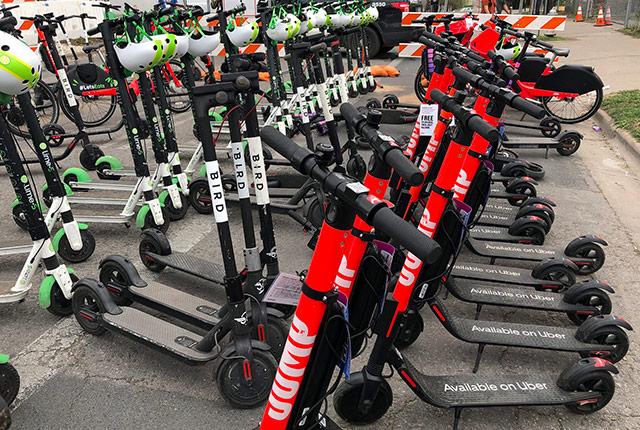 flickr | Anthony Quintano
Rental scooters, some with helmets, in Austin, Texas, the site of the study.

Almost half (48%) of injuries to commuters on rental scooters involve a head trauma, and 15% are traumatic brain injuries, according to a report issued this week by the U.S. Centers for Disease Control and Prevention.

The findings did not surprise Dr. Fred Rivara.

Most, if not all, of those traumas could have been avoided if the riders had simply worn protective helmets, he said.  (Alas, just one percent of the study’s 190 injured scooter riders was reportedly helmeted.)

“The only way to fix a head injury is to prevent it from happening in the first place,” said Rivara, a UW Medicine pediatrician and investigator at Harborview Medical Center's Injury Prevention and Research Center.

Rental scooters top out at about 18 mph on flat surfaces, which may sound slow, but many riders have no experience balancing on a narrow footpad, much less doing so while navigating sidewalks, bike lanes and curbs. (The study reported that first-time riders sustained the highest percentage of injuries.)

Rental scooters often do not come with helmets, and riders rarely bring their own. The two-wheelers are scattered around cities that allow them, like Tacoma, Washington.  Starting May 15, Spokane, to the east, will allow vendor LIME to place about 100 electric scooters and 400 bicycles in downtown Spokane, with no helmet use required under a new agreement.  Curiously, though, commuters riding private bikes and scooters through downtown Spokane are still mandated by law to wear helmets.

Rivara expressed concern that the growing use of helmet-free rentals is emboldening bicycle owners to forgo the helmets they usually wear.

“Unfortunately we’ve seen a back-stepping,” he said. “For a long time we’ve worked on the norm that if you ride a bike … you wear a helmet.  But now the social norms seem to be changing because of these bike and scooter shares.”

Anyone who might rent a bike or scooter should carry a helmet with them, Rivara said, noting that several collapsible models are available. Rivara also said cities should force rental companies such as LIME and JUMP to supply helmets at docking stations, though he acknowledged the idea’s difficulty.

The study was conducted in Austin between September and November 2018 by CDC investigators and counterparts with the city’s Public Health Department. Among the 190 reported injured riders, ages ranged from 7 to 79; the average age was 29. This is the second such well-publicized study; it was preceded by a study by UCLA that reported similar conclusions and injury data.