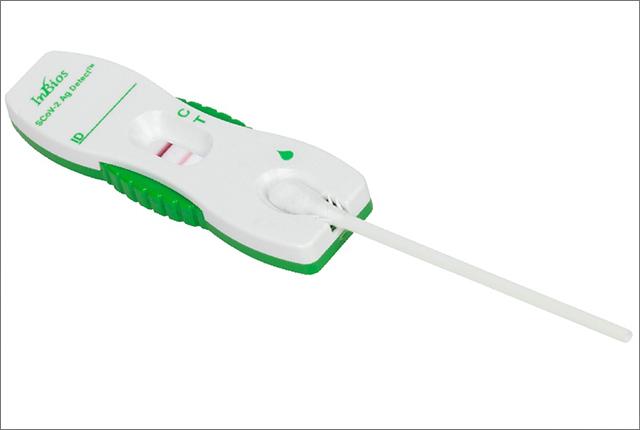 InBios International, Inc
When a swab is placed in the test cassette, a red line by the letter “T” denotes presence of SARS-CoV-2 proteins.

The rapid antigen tests used by many Americans for at-home and workplace COVID-19 testing accurately detect the new variants of SARS-CoV-2 now common in the United States, a new study has determined.

“These tests performed just as well for Delta and Omicron as they did for earlier variants of SARS-CoV-2,” said Dr. Paul K. Drain, associate professor of global health at the University of Washington medical and public health schools, who led the study. He is also an associate professor of medicine, Division of Allergy and Infectious Diseases, at the UW medical school.

Rapid antigen tests work by detecting the presence of viral proteins. Because these tests were developed early in the pandemic, they were optimized to detect proteins from viruses common at that time.

Since the COVID-19 pandemic began, however, mutations have appeared in the virus that have altered these proteins, thereby raising the possibility that the tests might not be as effective in detecting these new variants.

In the study, researchers looked to see how well two commonly used rapid antigen tests detected infections by three variants: the early — so-called “wild-type”— variants that dominated during the first months of the pandemic; the highly transmissible Delta variant that was responsible the surge of cases in mid-2021, and the even more transmissible Omicron variant that is causing most cases seen in the United States today.

The tests they evaluated were SCoV-2 Ag Detect Self-Test, made by Seattle-based InBios International, Inc., and the BinaxNOW COVID-19 Ag Card, made by Chicago-based Abbott Laboratories.

The tests were evaluated by exposing swabs to solutions containing high, medium and low concentrations of the different variants. As expected, the tests were less sensitive when the virus concentrations were low. There were no significant differences, however, between tests to detect the virus, regardless of the variant in the solutions.

To see how well rapid antigen tests worked in real world situations, the researchers also looked to see how well one of the test, the InBios SCoV-2 Ag Detect Self-Test, performed when it was used during different stages of the pandemic, when different variants predominated: the early, pre-Delta phase; the Delta phase, which began in the summer of 2021, and the most recent phase in which Omicron predominates.

In this part of the study, they examined the test results of 800 people in King County whose infections had been confirmed with a highly sensitive test, called reverse transcriptase—polymerase chain reaction. The RT-PCR test can not only detect infinitesimal amounts of viral RNA, making it highly sensitive, but it can also identify the variant causing the infection. Again, the researchers found the rapid antigen test performed similarly, whichever variant was responsible for the infection.

“The overall message from our study is that these tests remain consistent, despite the circulating variant,” said Drain. “But we should be clear that that doesn’t mean they’ll necessarily work as well with future variants. If a new major variant comes along, we’ll have to make sure the rapid tests work well on any emerging variants.”

The study was funded by InBios International Inc.

Drain is also the author of a clinical review recently published in the New England Journal of Medicine on how to use and interpret rapid tests for SARS-CoV-2 infection.