Addiction researcher Caleb Banta-Green offers context to the troubling spike during COVID-19's emergence, and ideas for combatting it. 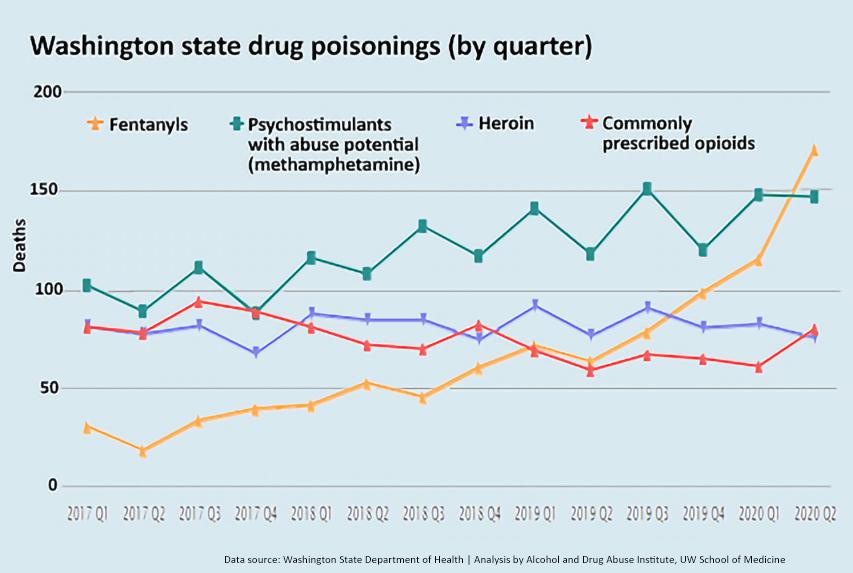 A chart shows fentanyl's sharp increase in Washington overdoses in the first half of 2020, the last period for which data are finalized.

In late December, the Centers for Disease Control and Prevention reported a despairing fact: 81,230 Americans had succumbed to drug overdoses in the year that ended in May 2020. It marked the highest total of overdoses ever for a 12-month span and an increase of 18% from the previous span.

The report largely attributed the rise to illegally manufactured fentanyl, an opioid often counterfeited to resemble oxycodone pills. Fentanyl is fast-acting and its danger lies in its potency: 50 to 100 times stronger than morphine. In 2020, fentanyl overtook methamphetamine as the drug most involved in overdoses in Washington state.

For nearly two decades, Caleb Banta-Green has closely observed drug trends in Washington. He is principal research scientist at the Alcohol & Drug Abuse Institute (ADAI), housed in the Department of Psychiatry and Behavioral Medicine at the University of Washington School of Medicine.

In the edited, condensed Q&A that follows, he talks about fentanyl trends and his ideas to combat the drug’s ascendancy.

Q. In light of the CDC report, what parallels do you see in drug overdoses in Washington state?

Q. The CDC reported that in 46 states, deaths involving synthetic opioids, mainly fentanyl, increased 38%. But fentanyl’s rate of increase in 10 Western states was 98%. Why is fentanyl's presence so strong out West?

A. Fentanyl actually hit the East Coast and Midwest first, in around 2013. Its growth was slow and steady for several years before it really arrived here in about 2016. We’re at the tail end of a wave that’s been building across the country, so we've gone from a low point to a high point quickly.

Q. Suicides have spiked in parallel with COVID-19. Do you think depression and anxiety related to COVID-19 have contributed to overdose deaths?

A. I don't think intentional suicide is the driving factor with fentanyl. I just think the drug is cheap, high-potency, addictive, and readily available.

Q. But state data (see line graph) shows a surge of fentanyl-involved deaths in the first six months of 2020. If you don’t think pandemic-driven suicide was a factor, do you think that spike would’ve happened without the pandemic?

A. We know that a person is more likely to die of an overdose if they are alone. Everyone had more time alone last year. It's a reasonable theory that the overdoses would leap with a drug in high supply, mixed with the continuing pressures of social determinants of health, and then on top of that the isolation and stress of a pandemic.

What’s interesting, though, is that we didn’t see that same sharp increase with heroin and pharmaceutical opioids – just fentanyl. We don’t know why.

Q. Would you guess that fentanyl's outsize presence would diminish in the next 3-5 years? Could you see the state getting a handle on it in that time?

A. It feels entrenched. The profit motive is high and the supply lines seem limitless. Synthetic compounds have really overtaken the botanicals, and I struggle to see how you can meaningfully impact supply of a synthetic chemical, compared to a poppy field.

That said, I think we can get a better handle on it. We're deploying interventions in a unique way compared to much of the country, in terms of low-barrier, rapid access to judgement-free care.

There’s a phenomenon happening that does pose a challenge:  We are seeing adolescents with full-on opioid use disorder who are taking only these fake fentanyl pills – taking them orally or smoking them but not injecting them.  So they are developing an addiction but unlikely to engage with syringe exchanges or other community services. And a lot of their drug purchases happen via the internet and Snapchat, not street sales, so they’re not getting picked up by police. The upshot is these young kids are less likely to be in a place where they could build a connection with someone who could discuss options for managing their use and overdose risk

Q. You mention that adolescents are often smoking or snorting fentanyl. How do we know this?  And isn’t fentanyl powerful in any form?

A. Correct, you can absolutely overdose by taking fentanyl orally. A lot of what we’re seeing among overdose deaths is people who have crushed up pills and smoked them. We are relying on evidence from police crime labs. From data as of December 2020, we can say 89% of police-confiscated fentanyl is in tablet form. The pills are made to look like oxycodone 30 milligrams. And police often are finding straws, where people have snorted the drug, or burnt foil indicating smoking.

A. The speed of onset – the high – comes faster than heroin but so does the decline. You get a quick reward in using, so you like it, and then it disappears, so you need to use again. That characteristic of the drug increases its addiction potential.

Q. Does fentanyl have a social cachet like cocaine did in the 1980s?

A. Not exactly but our sense is that the drug has an aura of safety because it looks like a pill. And we’re seeing an increasing number of people in the state who are coming to treatment for “Perc 30’s,” most of whom realize it’s really fentanyl.

I have a colleague who does outreach with people who are unhoused and he has six adolescents on his treatment caseload who have full-on addiction and they’re just smoking fentanyl. So something is going on in this young cohort around openness and acceptance to use these compounds no matter how much we do. King County is working its butt off to spread the message that these pills that look like oxy are fake and can kill you.

The challenge we deal with is the adolescents’ sense of invincibility and their misplaced trust in the person who sells them the drug. It feels very much like what I saw in 2003 with Ecstacy. People got scammed all the time, sometimes with deadly results.

Q. What can you say about the homeless population’s involvement in the increase in overdoses?

A. There certainly are deaths from fentanyl use among people who are unhoused. However, Public Health–Seattle & King County found data showing that a smaller proportion of deaths among that population involved fentanyl, compared with other drugs. Homeless folks are much more likely to have methamphetamine and/or heroin. I should mention that there is also been an increase in meth-involved deaths in that population. The “psychostimulants with abuse potential" has risen 50% since 2017 (see line chart).

Q. If you think about all that’s been done to heighten public awareness of overdose risk – the websites, campaigns to increase naloxone availability, a smartphone app to detect overdoses, blame-free hotlines – how effective would you say those efforts have been?

A. I'd say they have blunted the increase. Last year for instance we put out 11,000 naloxone kits, which reversed over 2,000 overdoses; probably 5-10% of those would've been fatal. So that’s 50 to 100 people just through naloxone. That's great, but it’s statistically subtle. The bigger thing is that we have a lot more people on treatment medications. Buprenorphine and methadone cause a 50% mortality rate reduction annually.

Moreover, most people who go on treatment medications report feeling normal, sometimes for the first time in their lives.

Q. Is there an opportunity to do more with treatment medications?

A. Absolutely. There is a massive opportunity to do way more with both buprenorphine and methadone. They’re hamstrung by regulations and also by stigma among providers who resist doing this work because of a bias against the patient population.

There is also persistent societal misunderstanding of opiate-use disorder and not wanting medications used to help solve that problem. People have this idea that inpatient care alone – checking in to a center for behavioral therapy – will work. But inpatient treatment without medication is not effective for many people because opioid-use disorder is not just a psychological phenomenon. There is a strong physical component, as well.

A lot of our work at ADAI is trying to understand the problem, understand how clinicians are dealing with it, and train clinicians statewide in a medication-first approach including client centered, shared decision making.