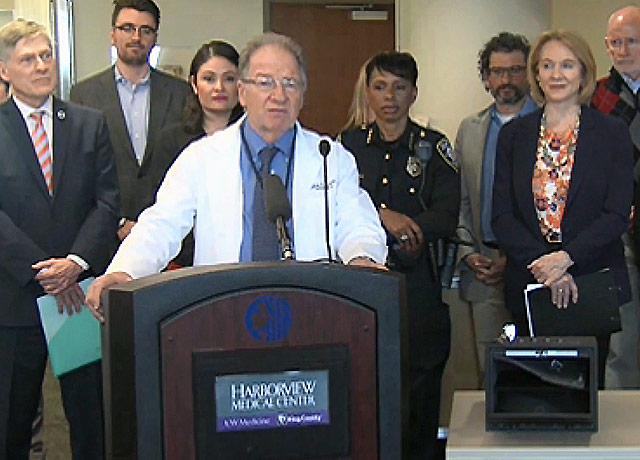 Seattle Mayor Jenny Durkan today announced that she and Councilwoman M. Lorena Gonzalez will propose legislation within the next month to require safe storage of all firearms in the city.

“We know for a fact that unsecured, unsafely stored guns lead to public safety tragedies,” Durkan said at a news conference at Harborview Medical Center. “They end up on the black market, they end up as crime guns, and often … are used in suicides that could be prevented or get in the hands of children, who get injured when they shouldn’t.”

Among the handful of speakers was Dr. Fred Rivara, a UW Medicine pediatrician and researcher of gun violence.

“Part of my role here at Harborview is to care for these victims of firearm injuries. In both young children and adolescents, these incidents are nearly always the result of having a gun that’s not been safely secured and stored at home,” he said. “These injuries are often life-changing, if not life-ending."

A study conducted at Harborview’s Injury Prevention and Research Center found that safe storage of guns reduced accidental injuries and suicides among youth by 73 percent, Rivara said. The reduction was greater still, 78 percent, if both guns and ammunition were locked up, he said.

Rivara demonstrated that opening a locked gun box takes just a few seconds to press an electronic keycode atop the box. “Locking it up does not obviate that ability to use (the gun) for self-protection,” he said.

Durkan and Gonzalez emphasized that they will work with City Attorney Pete Holmes to fashion language in the legislation that will stand up to lawsuits that might be filed to block new ordinances.

The city obviously cannot confirm the safe storage of every firearm in Seattle; instead, it would seek to levy fines against gun owners whose firearms are either stolen or otherwise obtained because they were not secured, and then used in crimes or suicides. Gun owners whose firearms are stolen but not reported stolen could face fines if the weapon later causes harm, Gonzalez said.