From out of the blue comes a better bladder-cancer detector

From out of the blue comes a better bladder-cancer detector 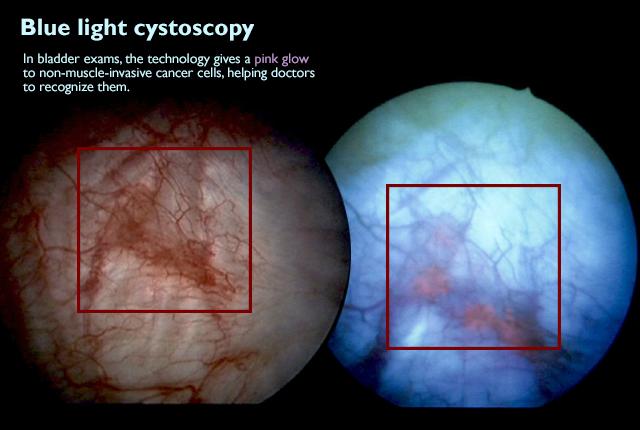 UW Medicine urologists with the Seattle Cancer Care Alliance possess a mechanism that makes the tumors glow bright pink. All the better to see them.

“Seventy percent of bladder cancer patients have non-muscle-invasive disease. That’s the population who can benefit,” said Dr. Jonathan Wright, a professor of urology at the University of Washington School of Medicine.

The program was first in Washington state to offer blue-light detection technology, putting its care on par with top sites in the National Cancer Care Network, Wright said.

Bladder cancer is the fourth most common cancer among U.S. men, and men are about three times more likely than women to develop the condition. It emerges mostly in people over age 55, with a hallmark symptom of blood in urine.

In an initial bladder cystoscopy, a urologist inserts an endoscope through the urethra and into the bladder. A white light and tiny camera at the tip of the endoscope illuminate the bladder’s inner walls and preliminarily identify growths of concern.

“If we see a lesion or if the patient has an atypical urine cytology test, we now will take those patients into the OR for the blue-light cystoscopy and biopsy at the same time,” Wright said.

Blue light’s value is both diagnostic and therapeutic. It is employed in two stages:

“It probably helps us pick up significantly more tumors that white-light cystoscopy can’t reveal – including the flat tumors called carcinoma in situ, which can be quite aggressive but difficult to see with the naked eye,” Wright said. “For people who have tumors that we’re resecting, you flip the blue light on to confirm that you get all the tumor tissue and don’t leave any behind.”

“This tool will allow us to do better resections and hopefully improve bladder cancer survival,” Wright said.