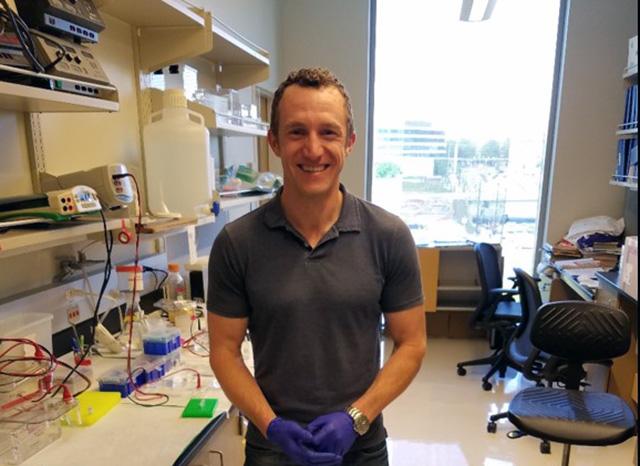 Matt Hart, a postdoc in pathology in the Horwitz lab, led study on reprogramming B cells in a search for new treatments for a childhood leukemia

A potential new approach to treating the common childhood cancer,  acute lymphocyte  leukemia, or ALL, is being explored at UW Medicine.

ALL, a blood cancer, represents approximately 25 percent of cancer diagnoses the newborn to 15-year-old age range.  More than 3,000 new cases of ALL are diagnosed every year in the United States, and the incidence is rising.

Matt Hart, a postdoc  in pathology  in the lab of Marshall Horwitz  at the Institute for Stem Cell and Regenerative Medicine, conducted a multiyear investigation of a possible new way of treating ALL.  The findings of this research, still in its preliminary phase, was  published in  the journal PLOS Genetics.

The researchers explained that the 5-year survival rate for ALL has increased significantly since 1975,  from 60 percent  to 90 percent in patients under 15.  The treatments, typically chemotherapy, bone marrow transplants, and, recently, immunotherapy , are still hard on children, families, and health systems, and can have side effects. Adolescents and adults fare less well.

ALL, a blood cancer,  occurs when the bone marrow makes too many of the white blood cells known as lymphocytes. The rapid growth of these immature stem cells impedes the development of healthy immune cells, thereby compromising the body’s ability to fight disease and infections.

In their search for better treatments, the Horwitz lab concentrated on B-cell lymphocytes.

About a third of all cases of B-Cell leukemia possess a mutation in the PAX5 gene,” said  Horwitz.  This gene plays an imporant role in B-cell development.

“Others have previously shown that restoring PAX5 can correct cell growth, but how to do that in ALL patients is not obvious. We do know that PAX5 is related to two other gene family members, PAX2 and PAX8, which are not mutated in leukemia. What we were able to show is that you can turn on PAX2 to functionally replace PAX5.”

The discovery opens up other, broader possibilities.

Horwitz and his team found that PAX2, which is normally activated by salt levels in the kidney, can similarly be switched on by adjusting salt concentrations for leukemia cells, a revelation that is leading to a new line of inquiry into the physiology of B-Cells and  perhaps, new clues about how ALL begins  and how it can be stopped.  Horwitz is also eager is to explore additional applications of using one related gene to compensate for another - not just for ALL, but for other types of cancer and genetic disease.

Could reprogramming stem cells at the genetic level someday eliminate the need for chemotherapy?

“That’s hard to say,” Horwitz  said, emphasizing that this is an early stage investigation. “A colleague described it as a, ‘pipe dream’. But I think having a pipe dream is the basis for making discoveries.”

Guest blog post by Thatcher Heldring of the Institute for Stem Cell and Regenerative Medicine.