Scientists from a variety of disciplines gathered to discuss their latest work on cannabis. 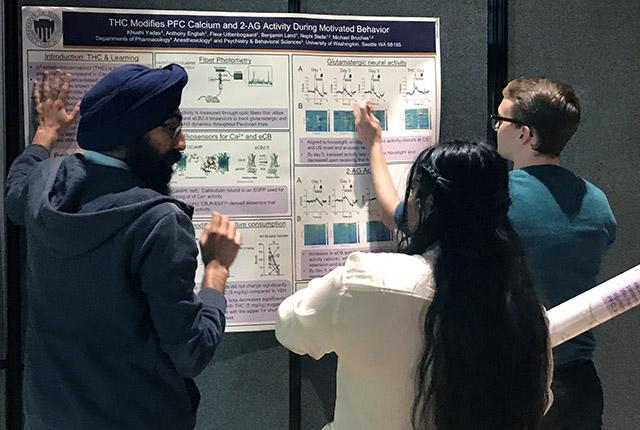 A recent retreat for the Cannabis Research Center brought together scientist from many disciplines to discuss important questions in their fields, and to share approaches for finding answers.

Presenters and attendees from several UW and Washington State University schools and departments met at the Intellectual House on the UW campus.  They included faculty, graduate students and undergraduate researchers.

The keynote speaker was Daniele Piomelli, a world renown neuroscientist, who, among his many achievements, delineated the biochemical pathways and physiological roles played by certain cannabinoid compounds.

He is the Louis Turner Arnold Chair in Neurosciences and professor of anatomy, neurobiology and biological chemistry at the University of California, Irvine, and is also at the UCI Center for the Study of Cannabis.

In addition to his talk on “The Impact of Cannabis in Adolescence: Time to Take a Fresh Look,” Piomelli also joined in discussions with researchers and students following their presentations and poster sessions.

Also in attendance was Washington State Rep. Shelley Kloba, who helped evolve the state’s legal cannabis industry with protections for children and patients, and four guests from the Liquor Cannabis Board, a Washington state administrative agency that reports to the governor.

The three main presentation subjects were:  cannabanoids and new technologies, cannabinoids and behavior, and  cannabaniods and impairment.

The speakers and their topics were:

Garth Terry, Psychiatry, UW School of Medicine: Treatment of Cannabis Use Disorder: Is there a role for adrenergic antagonists?

Overall, to advance prevention science, the cannabis researchers were interested in finding ways to reduce risks, enhance protections, and define problems and predictors, particularly as cannabis use is perceived as more normalized as a result of legalization in several states.

The poster sessions covered a wide range of research areas, including the impact of cannabis use during pregnancy in healthy women, THC metabolism, the use of cannabis for chronic pain not related to cancer, transfer of THC through the placenta, perceive effects of cannabis on ADHD (Attention Deficit Hyperactivity Disorder) symptoms, whether cannabis use had effect on memory, and several other topics.

Nephi Stella, professor of pharmacology and of psychiatry and behavior sciences at the UW School of Medicine, heads the Cannabis Research Center. He said he felt that the retreat was successful. It introduced researchers with diverse expertise, experience, and backgrounds, showcased student projects, and provided time for brainstorming together.