Opinion: The lexicon that students labor years to acquire can sound like gibberish to patients. 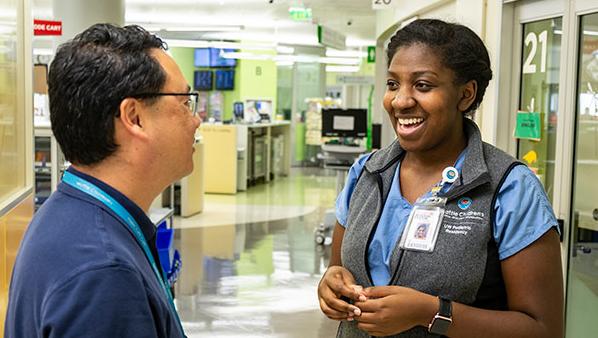 Outside a patient’s room at Seattle Children’s Hospital, Dr. Rebekah Fenton is leading “family-centered rounds,” updating a circle of clinicians on the health of a child in the unit. She is performing a balancing act, speaking in medically specific terms that make the case report useful to the white coats but ensuring that that child’s parents are engaged, too, and don’t feel like interlopers at a foreign-language film fest.

Fenton, a third-year resident at the University of Washington School of Medicine, is constantly switching between two vocabularies – three, if you count her pediatric patients. (She does.) Fenton writes about juggling lexicons in an essay published in the Journal of Palliative Care.

“I initially struggled, in particular with kids who are 4 or 5, to understand what information is developmentally appropriate. Now I start visits off by asking them questions, which is both enjoyable and more informative than I thought it would be. I make clear that they can also defer to their parents, which I think sets them up to be able to advocate for themselves later. When I answer their questions, I have to ensure that the parents understand as well, and I need a sense of how much the parent wants the child to know.”

Growing up with parents who had healthcare-related careers, Fenton writes, could be a drag. Conversational crudities such as “pee” and “poop” were not uttered at home; it was “urinate” and “bowel movement” instead. Today, as a second-generation pediatrician, she can appreciate her family’s tilt toward formal language as well as memories of her dad’s calming after-hours phone calls with worried parents.

That foundation of communication enabled Fenton to recognize a red flag in students’ med-school acquisition of medical terminology, which she calls out in her essay: As students adopt a new vocabulary of 50,000+ words over four years, their “ability to easily communicate with patients and families becomes threatened. Our medical education and training in itself becomes a language barrier.”

It’s an “insidious” process, Fenton writes, in which the new lexicon slowly supplants the old – and not to the benefit of patients. She suggests that doctors “combat the temptation to take a family’s understanding for granted.”