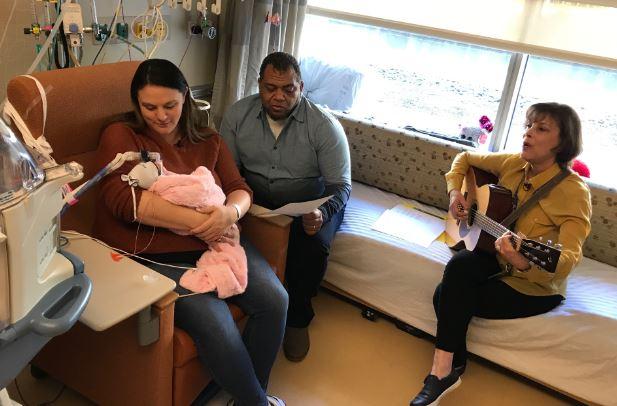 UW Medicine
Shannon Turner said that even humming to his daughter, Kassie, seems to calm her.

Although she’s only 32 weeks old and weighs 3 pounds, Kassie Turner has made her preferences known: When her dad, Shannon, sings in his gravelly baritone, or even hums, her heart rate and blood pressure drop. This simple act soothes Shannon, too.

“I’ve noticed when I’m here, and I start to hum, whether she’s getting her nose mask readjusted (to help her breathe) or her diaper changed, it helps calm her down,” he said.

Lullaby writing and singing give Turner and his wife Danielle a way to bond with Kassie, and to center themselves when their circumstances feel unmanageable.  They arrived Feb. 5 at UW Medical Center's Neonatal Intensive Care Unit (NICU), with Danielle experiencing superimposed preeclampsia, a condition caused by hypertension. Kassie was born that same day, two months early, at 28 weeks.

A few weeks later, UW Medicine’s neurologic music therapist Gayle Cloud appeared, asking if they’d like to create a custom lullaby.  She began offering music therapy in the hospital's NICU four years ago, and has adapted everything from Dave Matthews tunes to standards like “Twinkle, Twinkle, Little Star.”

They chose the melody of “Jesus Loves Me” to reflect their faith and, with Cloud's help, crafted lyrics to fit their family, adding the names of Kassie’s three siblings into the chorus.

Creating a lullaby is more than a distraction for stressed parents. The positive effects of singing to newborns, especially premature infants, is well-established in the medical community. A 2013 study showed that music decreases the stress response and helps babies devote more energy to neural and other development. The choice of the song didn’t seem to matter, according to the study. Other observations indicate music aids babies' sucking responses and oxygen saturation.

Cloud has lost track of the number of families she’s worked with.  The diversity of new parents has enabled Cloud to facilitate lullabies in French and Spanish, and even to transform Korean melodies.

“The moms will often tell me they don’t have a singing voice,” she said. “But I always say that the baby loves your voice, no matter what you sound like. Your baby has heard your voice all throughout your pregnancy while in the womb.”

The best music for a baby is live music sung in person by mom or dad, Cloud noted. Live music allows the music therapist and parents to match babies’ mood or heart rate, slowing or softening the lullaby in the moment. Recordings are more difficult to modulate rhythm and volume.

“I thought it was great that we could create this,” Danielle Turner said as Kassie, wrapped in a furry pink snuggly, cooed in her arms. “She will not only have this lullaby in the NICU, but it is something she can treasure for the rest of her life.”