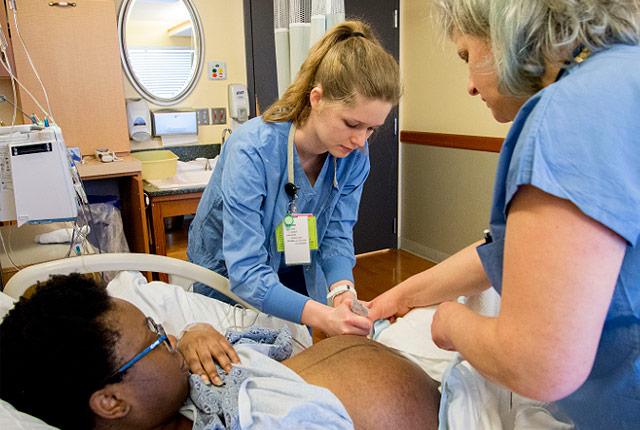 Pregnant patients with a low risk of birth problems who are cared for by a midwife will likely leave the hospital maternity unit having experienced fewer interventions and complications than if attended by an obstetrician, a new study has concluded. These findings appear this month in the journal Obstetrics & Gynecology.

Researchers reviewed data from the medical records of more than 20,000 women with no known medical or obstetric complications. The data involved 11 Pacific Northwest hospitals and spanned 2014 to 2018. Their findings indicated that women who were attended by midwives during labor had fewer interventions such as cesarean delivery or use of an epidural. The data was collected as part of the a perinatal quality-improvement effort to gather birth data for analysis and improvement of maternal and newborn outcomes.

The study covered 23,100 births, of which 3,816 (14%) had labor managed by midwives and 19,284  who had labor management by obstetricians. The study involved singleton births between 37 and 42 weeks with no significant medical complications. Most of the mothers (53%) were 30 to 34 years old.

“Compared with obstetricians, midwifery patients had significantly lower intervention rates,” the authors. These patients wre less likely to have artificial rupture of membranes, labor induction, episiotomy, and use of vacuum or forceps.

The midwife patients who were giving birth for the first time had an approximately 30% lower risk of cesarean delivery, the paper said. For mothers who had previously given birth, the midwife group had a 40% lower rate of cesareans compared with the obstetrician group. There was, however.  a higher incidence of shoulder dystocia, a complication of vaginal birth, in the midwife-attended group.

“The reasons underlying the association between midwifery care and lower cesarean rates in our study are not clear,” the authors stated. “A different approach to care ... may be part of the explanation.” It also may be that mothers who opt for a midwife's care may be more committed to vaginal birth and less open to interventions.

“Interestingly, even after controlling for a number of confounding factors which might have explained the differences between obstetricians and midwives, we still found that midwife management of labor was strongly associated with a decrease in cesarean rate, ” said  Mary Lou Kopas, chief of midwifery at UW Medicine and one of the study authors.

A study last year in PLOS ONE found that in states where midwifery was integrated into health systems, the outcomes for mothers and their babies were generally better. In this video, Kopas commented on the 2018 study, which showed Washington state had a higher level of integration than other U.S. states. Currently just 10% of U.S. births are attended by a midwife, in contrast with half of the births in the UK, according to the Foundation for Healthcare Equity.

"Right now in the U.S., we have a fairly small fraction of births being attended by midwives, yet as this study and others show, our outcomes are very good,” Kopas said. “ I believe we are a well-kept secret at this point, but I think as more families learn about the option of having a midwife for their pregnancy and birth, particularly in the hospital, you will see more women choosing this option."

That does not mean that midwives can replace obstetricians, she added.

“We need them to manage more medically complicated situations, such as when a C-section is needed,” she said.

With the shortage of obstetricians predicted to worsen, particularly in rural areas, midwives caring for low-risk women can free up obstetricians for the more high-risk pregnancies, Kopas said.