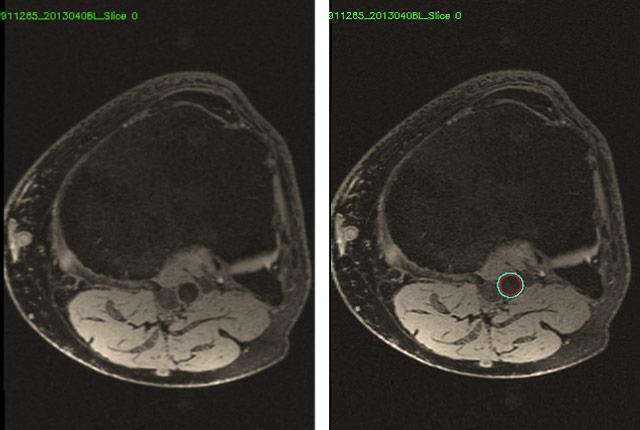 Chun Yuan lab
Depicted in video below, artificial intelligence (right image) identifies and traces the popliteal artery behind the knee.

As treasures go, this may not rival Apple’s market capitalization or even the immeasurable riches of “It’s a Wonderful Life” hero George Bailey. But MRI scans of 4,796 patients’ knees have become a digital trove, helping to prove that artificial intelligence (AI) can recognize cardiovascular risk as accurately as medical specialists can – and in a fraction of the time.

“This will be valuable for cardiologists, neurologists, radiologists, epidemiologists, and for patients who need preventive care for heart attack and strokes,” said Chun Yuan, a bioengineer and UW Medicine radiology researcher.

He is principal investigator in a massive study to establish a computer algorithm’s ability to identify an artery and delineate its inner and outer boundaries, just as radiologists do by hand to discern vessel wall thickening.

The initial findings were published recently in the journal Magnetic Resonance in Medicine.

Knee MRIs, of course, are not intended to diagnose atherosclerosis, but rather to reveal sources of musculoskeletal pain. These patient scans had initially been ordered in a study of osteoarthritis. But knee MRIs inevitably include the popliteal artery, which runs vertically behind the knee joint. It has the potential to depict someone’s vascular health as well as vessels nearer the heart.

“This project was among many funded by the American Heart Association to explore AI,” Yuan said. “It took more than a year to develop the algorithm that we used to analyze about 3.5 million images.”

The algorithm was written by Li Chen, a UW grad student in electrical engineering and computer engineering, with guidance about knee MRI from Niranjan Balu, research assistant professor of radiology.

AI’s magic lies in its speed and consistency. It would be unthinkable for a radiologist to hand-label 3.5 million blood vessels and contours. It only took seven minutes for AI to process one knee scan, versus up to three hours for an experienced human. (One MRI knee series comprises about 70 images, collectively covering about 4 vertical inches of knee joint.)

“We did an extensive validation study in parallel showing that AI can learn to analyze scans of blood vessels with comparable accuracy to experienced humans,” Yuan said. “Cutting the review time is only part of the accomplishment here; adding AI raises the confidence that any scan of a blood vessel can help predict a person’s cardiovascular risk.

“Think of how many knee MRIs are out there. An AI algorithm to read knee MRIs for cardiovascular risk adds value that wasn’t there before,” Yuan said.

As a bonus, the patients’ knee MRIs also covered a span of eight years, so Yuan has data about how the vessel lesions evolve. And because the scans emerged initially from suspicions of osteoarthritis, those patients are considered “near-normal population” – that is, people for whom cardiovascular risk didn’t factor into their inclusion in the study.

Their research already has won an AHA competition on precision medicine, with a $250,000 award to Yuan’s team.