Leading UW Medicine and Fred Hutch scientists in microbiology, biochemistry and genome sciences are among the new members. 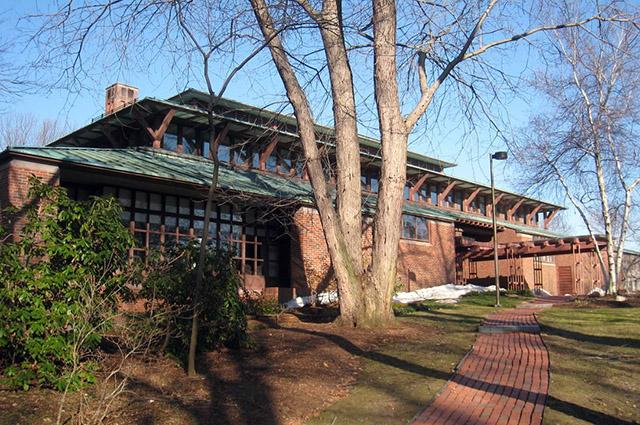 Daderot/Wikidata
The American Academy of Arts & Sciences building is located in Cambridge, Mass.

Among the newly elected members of the American Academy of Arts & Sciences are four researchers from the UW School of Medicine and the Fred Hutchinson Cancer Center.

They are Caroline “Carrie” Haywood, the Gerald and Lyn Grinstein Professor of Microbiology; and Rachel Klevit, professor of biochemistry and holder of the Edmond H. Fischer/Washington Research Foundation Endowed Chair in Biochemistry, both at the UW School of Medicine

They are joined by Fred Hutch researchers Steven Henikoff and Harmit Singh Malik, who both are also affiliate faculty in genome sciences at the UW medical school.

The American Academy of Arts and Sciences, founded in 1780, honors excellence in a variety of fields, and convenes to examine new ideas, address issues of national importance, and advance the public good. It recognizes accomplishments and leadership in the arts, academia, industry, public policy, and research.

“We are celebrating a depth of achievements in a breadth of areas,” said David Oxtoby, president of the American Academy, in an April 28 news release announcing the list of new members. “These individuals excel in ways that excite us and inspire us at a time when recognizing excellence, commending expertise, and working toward the common good is absolutely essential to realizing a better future.”

“The Academy was founded on the belief that the new republic should honor truly accomplished individuals and engage them in meaningful work,” said Nancy C. Andrews, chair of the Academy’s Board of Directors, and quoted in the announcement. “The Academy’s dual mission continues to this day. Membership is an honor, and an opportunity to shape ideas and influence policy in areas as diverse as the arts, democracy, education, global affairs, and science.”

All four of the Seattle-area new members are in the Biological Sciences Class of the Academy.

Caroline Harwood studies metabolic networks and signaling in bacteria, and their energy production. The lab looks at how bacteria integrate diverse signals from their environment. One of Harwood’s major interests is bacterial longevity and persistence. Her team studies a photosynthetic bacterium, Rhodopseudomonas palustris, because of its survival tactics. It can withstand months of starvation as long as it is exposed to light, which it taps to make energy. She is working to understand genes important for long-term survival of such non-growing cells. Her research on such bacteria may hold ideas for converting inexpensive feedstock compounds to biofuels, such as like hydrogen gas. She also collaborates on studies of quorum sensing signals in bacterial cell-to-cell communication and on signaling between bacteria and plants.

She earned her Ph.D. in microbiology from the University of Massachusetts and did postdoctoral work at Yale University. She has been on the UW School of Medicine faculty since 2005

Rachel Klevit is noted for her work on molecular recognition. Her group studies protein-protein interactions that play roles in human disease. She has a special interest in how

cells guard their critical components. Her research involves a variety of structural, biochemical, biomolecular, and biophysics techniques that include high resolution nuclear magnetic resonance spectroscopy and mass spectroscopy. Among her ongoing projects are work on the breast cancer susceptibility protein BRCA1, human small heat shock proteins that has a housekeeping role whose production increases under cellular stress. These puzzling chaperone proteins are involved in neurodegenerative diseases, heart muscle problems, and cataracts. In other areas, her lab also studies a virulence factor found in sone disease bacteria. Klevit earned her Ph.D. from Oxford University.

Steven Henikoff has a wide range of interests in scientific research and inventions. He is noted for his work on how patterns of gene activity can change and be passed along through generations, without any changes in the DNA sequence. Because some of these inherited changes are reversible, his findings suggest the possibility that certain aspects of cancer also could be turned around. Henikoff is also recognized for developing computer programs and other research tools now used in many areas of medical research. For example, tools for comparing gene sequences, determining gene arrangements in living cells and understanding gene function. Henikoff did his undergraduate work at the University of Chicago, was drafted into the U.S. Army, and then went on to graduate studies at Harvard University in the early 1970s.

Harmit Singh Malik is an evolutionary biologist who studies genetic conflict:  how genes and proteins with opposite functions compete. This conflict can instigate evolutionary

change. He also researches how humans have evolved in their interactions with viruses. His work also includes studies of viral fossils found in animal genomes. Such analysis can point to intense periods of gene adaptation. He has worked with Henikoff to learn more about a mechanism called centromere-drive, which is helping to explain unusual genetic conflicts that occur during the type of cell division that produces reproductive cells. He is chemical engineering graduate of the Indian Institutes of Technology and did his Ph.D. studies at the University of Rochester.

Harwood, Klevit, Henikoff and Malik are, in addition, all members of the National Academy of Sciences.