The fight to get rid of yaws

The fight to get rid of yaws

Campaign efforts published in The Lancet  speak volumes about the complications of eradicating an infectious disease. 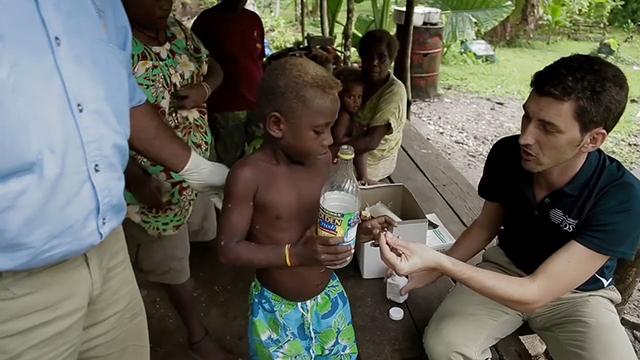 On the island of Lihir in Papua New Guinea (pop. 16,092), researchers made a massive effort to wipe out an infectious disease called yaws.

Their efforts, published Feb. 7 in The Lancet, speak volumes about the complications of eradicating a neglected tropical disease. The samples were processed at the Lukehart Lab at Harborview Medical Center; Sheila Lukehart, a University of Washington professor of medicine, allergy and infectious diseases, and global health, is an author.

Few people in the United States or Europe have probably heard of yaws. Almost 90 million people live in yaws-endemic regions such as tropical parts of Africa, Asia and the Pacific Islands. The infection manifests in disfiguring skin ulcers, mostly in children under 14, and is spread by skin-to-skin contact. If left untreated, it can become a chronic disease that leads to severe bone deforming lesions.

The disease is caused by the bacterium Treponema pallidum subsp. pertenue, closely related to the one that causes syphilis. It was ignored for decades after an incomplete eradication attempt between 1954 and 1964 that involved 50 million people in 46 countries. In 2012, the World Health Organization rolled out a new plan to eradicate the disease using a single dose of an inexpensive oral antibiotic called azithromycin, followed by targeted treatments.

Between April 15, 2013, and Oct. 24, 2016, researchers attempted to administer the antibiotic to everyone on Lihir. They reached 84 percent. Their effort dramatically reduced yaws from 1.8 percent to 0.1 percent at 18 months. But after two years the disease started re-emerged, rising to 0.4 percent after 42 months. Seventy percent of the new yaws cases were found in individuals who had not received the mass treatment. At 36 and 42 months post-treatment, five cases of active yaws, all from the same village, were resistant to azithromycin.

“Our findings highlight the importance of treating every person in a community to be sure of targeting all latent infections,” said lead author Dr. Oriol Mitjá from Lihir Medical Centre on Lihir Island.  “Doing multiple rounds of mass treatment may be necessary to eliminate yaws.”

Airlift Northwest opens new Pasco, Wash., base
Phthalates linked to changes in gene activity in placenta
Unraveling the mystery of why we overeat
NIH awards $10 million to study concussions in schoolkids
Men should check their genes for prostate cancer risk
END_OF_DOCUMENT_TOKEN_TO_BE_REPLACED