Polio and COVID-19 both fanned fear and uncertainty, but generated different public sentiment on control efforts. 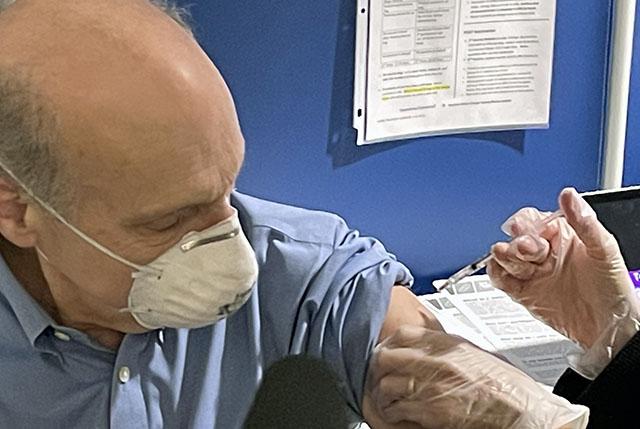 When pediatric geneticist Dr. Darrell Salk arrived for his COVID-19 vaccine at UW Medical Center-Montlake, the setting reminded him of similar immunization lines from childhood.

He recalled scenes of grade-school students in the early 1950s ready for their first polio shot.  1952 had witnessed one of the worse outbreaks of polio in the nation’s history.

A candidate vaccine had just been developed by his father, Dr. Jonas Salk, and was entering clinical testing.  A major national field trial was organized to evaluate its safety and efficacy.

Parents bravely consented to enroll their children in a double-blind trial, with no certainty of any benefit.  Families longed for a way to save their children from paralysis, iron lungs, metal leg braces, or weakened limbs as a result of polio.

More than 1.8 million first- and second-graders took part in the vaccine trial.  Earlier, Darrell Salk had received one of the first vaccine doses at home at the kitchen table.  His father had been studying different polioviruses since 1948, and was determined to put a stop to infantile paralysis.

After Jonas Salk reached a point in his research where he believed the vaccine he had developed could safely prevent infection, he vaccinated himself and his laboratory colleagues, who heroically had accepted the risks of working with the virus.  His family was next.  Darrell Salk, age 6 at the time, said his mother went first. Seeing that she was fine with it made it seem OK to him.

In adulthood, Darrell Salk, like many of his relatives, chose a career in medicine.  He did his residency training at the UW School of Medicine in the mid-1970s.  He is now retired from the UW medical school’s pediatrics faculty.

He has written on the history of polio and its prevention. Paralysis, he explained, was rare before modern sanitation was developed. Babies were exposed to the virus while still protected by maternal antibodies. Improvements in sanitation meant that babies did not come in contact with the virus until older, when not protected against paralysis.

By 1955, the killed-virus vaccine was announced as a success.

Salk said, “Church bells rang, parades were held, and people danced in the streets.  People welcomed the vaccine with relief. It was rapidly accepted.  Of course, there were doubters, but many of them changed their minds.  ”

It’s hard not to draw comparisons between how the country reacted to polio epidemics of the past century and the present coronavirus pandemic.

“The public response was unified against polio,” Salk said.  “Almost everyone wanted to participate in the effort.” While some other countries have created a uniform approach to the coronavirus, the United States response has varied, he said.

There also was a difference in Presidential leadership style.

“Pres. Franklin D. Roosevelt understood polio first hand,” Salk noted.  “He had suffered, and did not minimize what was happening.  He took action.  In addition to leading government efforts, he converted his own personal property [Warm Springs] into a place where patients could have rehabilitation.”

In contrast, the early months of the coronavirus pandemic were met with the White House “ignoring, blaming, and hoping it would go away,” Salk said.

Speaking to the concern that warning the public early on how dangerous and easily spread this coronavirus was would have caused widespread panic, Salk said, “There is no panic if officials are open and honest.  People would respond appropriately.”

When the polio vaccine became available, the National Foundation for Infantile Paralysis distributed it through a coordinated, centralized national

system that attempted to be fair. But, as is the case today with coronavirus vaccines, Salk said, back then, inner city Black populations were also less well vaccinated.

Coronavirus vaccine inequities are made worse by a disjointed manufacturing and distribution system. Each state is approaching getting the vaccine to people differently, Salk said, States are competing with each other to obtain supplies.

Lessons from polio epidemics are still used today.  Polio surveillance was the start of Centers for Disease Control and Prevention programs. Vaccine testing and approval was the model for Food and Drug Administration practices.  Research and manufacturing methods used now were created during the polio vaccine development.

Non-infectious killed-virus vaccines were then thought to be ineffective. Since killed polio vaccine was proven successful, we take killed virus vaccines, which cannot cause disease, for granted, Salk said.

Dr. Darrell Salk had preferred never to become a public figure.  When he realized that a portion of the public was hesitant to have a coronavirus vaccine, he came forward.

“Getting vaccinated against coronavirus is the right thing to do. Get it for your own sake, to protect your loved ones, and to contribute to ending the pandemic.

“If you have concerns about quality control of the vaccines because they were created so quickly that scientists must have skipped steps and cut corners, that’s not true.  They were developed fast because of the amount of resources applied and the large numbers of scientists working on different aspects all at once.  The time between steps was reduced and the review of data was done immediately.

“If you are worried about a severe or unknown possible reaction, have your vaccine in a medical setting, where an allergic response can be readily treated.  After a vaccine, people are asked to wait for at least 15 minutes before leaving.  If an allergic reaction is going to occur, it usually happens in that time frame.

Salk believes it is unwise to play the odds with the pandemic coronavirus: “I wouldn’t bet my life or the life of someone I love by not getting vaccinated. That’s not a good bet.”