Could phone app help people with mental illness in Ghana?

Could phone app help people with mental illness in Ghana?

A UW Medicine psychologist will start a five-year study in prayer camps where serious mental illness can be treated harshly. 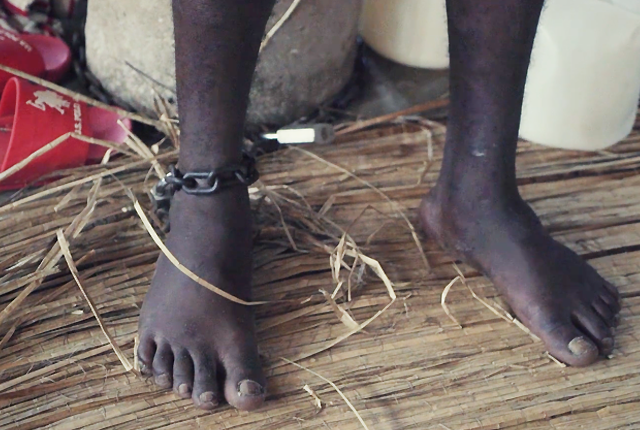 Daniel Mitelpunkt
In Ghanaian prayer camps, part of the treatment for people with serious mental illness is shackling, sometimes for months or years.

In 2017, when psychologist Dror Ben-Zeev first traveled to Ghana, he was braced for the disheartening sight of people chained to trees and concrete. He had heard that such forced confinement and a regimen of daily prayers was routine for people with serious mental illness who received treatment at prayer camps run by traditional and faith healers.

“One kid who couldn’t have been more than 14 years old was shackled in a room with adults. I kept thinking about what that kid must be going through at night, in that setting. It increased my sense of urgency,” said Ben-Zeev, a professor of psychiatry at the University of Washington School of Medicine.

In fact, he was there to understand why this severe treatment persisted — and to explore whether the Ghanaian faith healers who oversee the prayer camps would consider outsiders’ advocacy for more humane care of people with schizophrenia and other such serious illnesses.

This month, Ben-Zeev will return, joining Professor Angela Ofori-Atta and a team at the University of Ghana to begin a five-year study of a therapy model that bridges traditional beliefs and 21st century technology.

“At the clinical level, we’re hoping to reduce human-rights violations and to improve the psychiatric well-being of the patients. But our hopes and dreams are much greater: to create a tool and an approach that Ghana’s government and other key stakeholders will adopt, and which ultimately reaches healers across Africa,” he said.

Low- and middle-income countries may lack the healthcare capabilities of better-resourced nations, but many such countries also have robust 3G infrastructures to power mobile networks. This is why, at least technologically, the team’s smartphone-based mental-health app is a plausible platform for change in Ghana, one of the most religious nations in the world.

Awarded $3.9 million by the National Institutes of Health, the multinational research team will combine the phone app with pharmacotherapy and training by a mobile nurse in a study of several hundred people with mental illness who are receiving care at 20 prayer camps.

“The visiting nurse will come to the prayer camps and train the faith healers in how to use the phone app. She will also have permission to visit with the patients to administer medications. It’s a dual-pronged intervention in which medication helps the biological side of things and the healers become better informed and capable of delivering psychosocial interventions, which we think will improve patients’ health,” Ben-Zeev said.

The app’s digitally animated videos appeal to the faith healers, who often hold the resources, the business infrastructure and the public trust to treat this vulnerable population.  The videos, informed by focus groups and interviews with faith healers, encourage these paraprofessionals to consider that compassion and evidence-based therapies could produce better outcomes than shackles.

The video vignettes are situationally focused, with concrete guidance, for instance, on how to help someone relax, how to talk to someone who is hearing voices, and how to make someone feel valued among their peers, Ben-Zeev said. The vignettes are notable for their simple language, which is voiced by a speaker familiar with the Ghanaian culture and the stigma faced by people with mental illness there.

The researchers will measure whether the intervention affects the outcomes of the patients, Ben-Zeev said.

“Do we affect the healers’ practices at the camps? Are patients reporting less depression and psychotic symptoms? Are patients chained for fewer days?”

Over the past four years, he and his Ghana-based co-investigators have made inroads with governmental stakeholders, with directors of psychiatric hospitals, and with local citizens.

“There’s an awareness in Ghana that these human-rights issues are problematic, so they are looking for solutions and new ways to do things,” Ben-Zeev said. “That’s where our team hopes to come in.”