A palliative-care specialist discusses his role with terminally ill patients who want to hasten death by not eating or drinking. 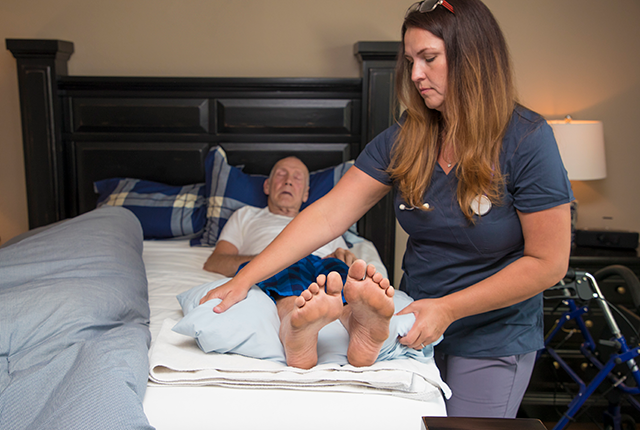 Getty Images
A hospice nurse provides palliative care to a man with Parkinson's disease and cancer.

It’s not only patient cases that inform clinicians' expertise. Geriatrician David Gruenewald took a lesson from his mom, Mary, who at the time was a resolute, capable woman in her late 80’s.  As Alzheimer’s encroached conspicuously into her life, she considered hastening her death so as not to burden her children.

“She saw this as a way of maintaining control over the end of her life," Gruenewald recalled. "We had talked about that for decades, so it was no great surprise that she started talking about possibly ending her life."

The plan his mom considered was to stop eating and drinking.

Gruenewald, a UW Medicine specialist for older adult patients, is medical director of the Palliative Care and Hospice Service at VA Puget Sound Health Care System. Keenly aware of the growing tidal wave of people age 60 and over, he recently delivered a training presentation to dozens of clinicians.  Its focus: how to talk with patients who are contemplating voluntary stopping of eating and drinking, “VSED” for short.

As an option for people with decision-making capacity who want to manage their death, VSED has not drawn the same public scrutiny and controversy as medical aid in dying, in which a clinician provides drugs that a patient takes — a practice that's legal in only 11 U.S. states.

“Workers in palliative care haven’t been much aware of VSED, even though very likely it has been going on for millennia,” said Gruenewald. He added that VSED is an important option for patients expressly because it does not require a doctor’s presence or participation.

“It represents personal autonomy and choice, and healthcare organizations like the American Nurses Association are publicly declaring that VSED is an acceptable, valid approach when palliative care fails to relieve end-of-life suffering,” he said.

When a patient is nearing the end of life or has a terminal condition, and expresses an interest in hastening death, palliative-care providers work to establish that the person has full decision-making capacity that’s not clouded by conditions such as depression or advanced dementia, and has suffering that cannot be adequately relieved by other interventions.

“The first thing is I want to understand is why you are asking for us to help you die. I want to fully understand that before we start talking about nuts and bolts of VSED. In my mother's case, the reasons for her suffering were key to every part of the conversation that happened after that,” Gruenewald said.

In his presentation, Gruenewald reflected on the experience of a male patient, 67, who had advanced cancer and could not tolerate more chemotherapy. The patient had been admitted to the hospital with pneumonia and voiced a wish to go home and die by self-inflicted gunshot.

“He did not see value in continuing to live and being unable to do the things that formerly gave his life meaning. In talking with him, it was very important that I understood his suffering — the physical, the emotional, interpersonal and spiritual reasons,” Gruenewald said. “And then to see if he was open to considering a less violent path, which turned out to be VSED.

“We were able to establish trust, and then to talk through that option and create a plan with supports. It wasn't quite what he had envisioned, but it was acceptable to him.”

Research indicates that patients who pursue VSED are typically over age 80 and significantly burdened by disease, dependent on others for care, and face a short life expectancy.

Although VSED is not very painful, Gruenewald said he would not recommend it to relieve suffering from severe physical symptoms in the final days of life. The VSED process usually lasts one to two weeks and requires resolve to carry out. Pangs of hunger and thirst typically diminish within a couple of days; dry mouth can be managed with ice chips and over-the-counter products. But the patient will grow progressively weaker, and dehydration may bring agitation and delirium. Physical and emotional support from family members and friends can help get through this phase.

“The way you die has an effect on the people that you leave behind,” Gruenewald said. “And there is evidence that, for many people, VSED can be more peaceful than dying by medical-assisted dying.”

VSED’s lack of immediacy gives the patient time to reminisce over stories and to say goodbye to friends and family. This opens the process and can make it more harmonious for all, Gruenewald said.

Another advantage: It gives the patient time to reconsider.  Mary Gruenewald lived another seven years after she initially broached VSED.

“She was in assisted living by then,” her son recalled. “For most of that time, it was at least acceptable, if not high, quality of life. And she was continuing to contribute meaningfully to friends and family in a way that other people really cherished. Those would have been years of life that she would have forgone.”