A UW Medicine urologist is collecting their stories as part of a study on the equity of care. 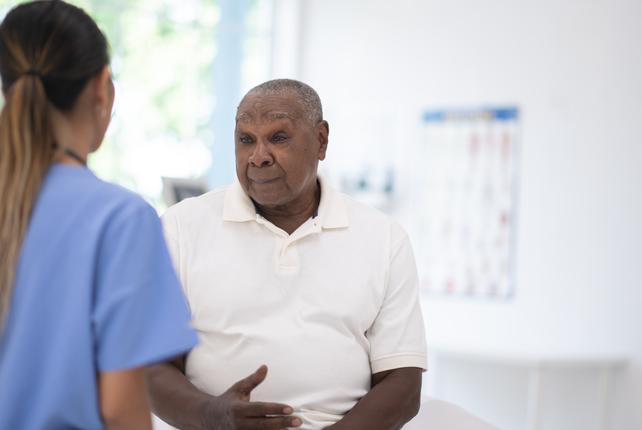 Getty Images
The statistics for Black men diagnosed with prostate cancer have been worrisome for decades.

If you’re a Black man and have had an experience with the early detection and diagnosis of prostate cancer, Dr. Yaw Nyame would like to speak with you.  He and his collaborators at the Black and African descent Collaborative for Prostate cancer ACtion (BACPAC) can reach you via Zoom, phone or even in person at your church, community center, library or barber shop.

Nyame is in his second year of research looking at the care that Black men experience leading up to a prostate cancer diagnosis. Community-driven research is needed to study health inequities in prostate cancer, he said.

“A patient- and community- centered approach to addressing racial inequities in prostate cancer ensures that we have the research priorities that matter most to Black men, that our approach is culturally appropriate and relevant, and that our research, clinical trial and intervention designs are effective,” said Nyame. He is a urologic oncologist at the University of Washington School of Medicine.

The statistics for Black men facing prostate cancer have been worrisome for decades. Nationally it is the most common nonskin cancer among males, affecting roughly 1 in 7 over their lifetimes. For Black men, though, the U.S. incidence is about 60-80% higher than in men of other ethnicities, and the mortality rate is twice that of other men.  For Black men in the Pacific Northwest, the news is equally troubling: Black men in our region are 60% more likely to die of prostate cancer than men of other races and ethnicities.

Nyame was involved in a study that showed Black men would benefit from prostate cancer screening at 45 years, rather than the recommended 55 years of age.

Working with a $500,000 CARES Award in 2020, Nyame built a team of biostatisticians, a health economist, population scientists with expertise in qualitative research, and trained community researchers and partners. He recently received a $735,000 research award from the Department of Defense to expand the group's work on inequities in prostate cancer nationally.

BACPAC, as well as the Communities of Color Coalition, have been reaching out to Black men to gather their personal experiences throughout the pandemic, as well.

Ben Young, the marketing and grants director for Communities of Color Coalition, said it was only after he finally had a prostate-specific antigen (PSA) test and found out his “numbers were off the chart” that he received the care he needed. But he experienced little follow-up until he found a Black urologist based in Everett.

“It made a world of difference,” said Young, now 67, and cancer-free. The coalition was doing its own study but has joined forces with Nyame’s group to reach more men.

“One of the things that I hope truly comes out of this is that Black men realize the importance of early detection and not wait until the eleventh hour to get seen,” Young said, adding that the issue of prostate cancer is often not discussed among family and community members.

Nyame also connected with Victor Tolbert, a personal fitness trainer who has worked to connect Nyame’s group with his church and other community members. After two years of pandemic-forced isolation, he’s also working with Nyame to take the outreach on the road.BACPAC is joining in a partnership with the National African American Male Wellness Agency on their annual 5k Walk/Run. Visits to churches and local barber shops are also being planned, Tolbert said.

Nyame and colleagues will assess the data, probably this fall, and try to identify themes and trends, and prioritize resulting research questions and initiatives.

“We’re counting on the community to tell us what their priorities are based on what we learn from our interviews,” Nyame said. “We also hope to develop community researchers through this process and to empower Black men to be a central team player in our research endeavors.”

If you want to participate in the study, email bacpac@uw.edu or sign up for an interview.