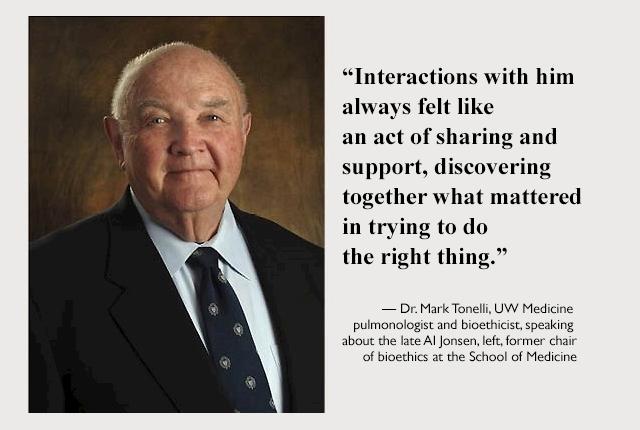 University of Washington
Albert R. Jonsen was elected to the National Academy of Sciences' Institute of Medicine in 1980.

[Editor’s note: This obituary includes content from a remembrance written by UW Bioethics and Humanities Professor Nancy Jecker and first published by the American Journal of Bioethics.]

Albert “Al” Rupert Jonsen, Ph.D., an emeritus professor and a former chair of the Department of Medical History and Ethics at the University of Washington School of Medicine, died Oct. 21, 2020, at age 89.

Jonsen led the UW department (now Bioethics and Humanities) from 1987 to 1999. In that time he transformed its focus from history to bioethics training, research, and service, said Nancy Jecker, a UW bioethicist whom Jonsen recruited.

“I will always remember Al fondly and with gratitude for the pivotal role he served during my formative years,” Jecker said. “He wisely advised me to arrive early, before the academic year was underway, to attend his now-famous summer seminar. It was essentially a crash course in bioethics, which I sorely needed. In those early days, I struggled to figure out what bioethics was and what role I, as a philosopher, might play.”

A pioneer in the field of bioethics, Jonsen served from 1974 to 1978 as a member of the National Commission for the Protection of Human Subjects of Biomedical and Behavioral Research. He co-authored the Belmont Report, published in 1979, which articulated ethical principles of beneficence, justice, and respect to govern human-subjects research. In 1980, he was elected to the National Academy of Sciences Institute of Medicine.

Jonsen also was one of three authors of the classic teaching text, “Clinical Ethics: A Practical Approach to Ethical Decisions in Clinical Medicine,” published in 1982. The book “carved out a role for ethics in the daily practice of medicine,” Jecker said. Its toolkit included the "four-box method" to help clinicians make difficult ethical decisions.

Jonsen "had a very large soft spot for physicians and other healthcare providers," shared Dr. Mark Tonelli, a UW Medicine pulmonary-care specialist and bioethicist.  "The fact that he immersed himself in clinical medicine, really seeking to understand what it is that we do ... projected a sense of humility and respect that was impossible to miss. While he was an astute observer of the medical endeavor, when he dealt with clinicians it never felt like you were being studied or judged. Rather, interactions with him always felt like an act of sharing and support, discovering together what mattered in trying to do the right thing."

As an undergraduate and graduate student, Jonsen trained in theology.  In a story recounted by The Wall Street Journal, Jonsen was among a small group of theologians present in 1964 at the Kennedy compound in Hyannisport, Massachusetts, to “enable the Kennedy family to redefine support for abortion.”

He received his doctorate in religious studies from Yale in 1967. For a time he was an ordained Roman Catholic priest but later left the priesthood to marry.  He was president of the University of San Francisco from 1969 to 1972 and during that time was a "roving bioethicst" at the UCSF School of Medicine.

After retiring from the UW School of Medicine, Jonsen returned to San Francisco to cofound the Program in Medicine and Human Values at Sutter Health's California Pacific Medical Center. He is survived by his wife of 44 years, Liz; his brother, Robert Jonsen; and sister, Anne Marie Carrick.