Rapid point-of-care tests could diagnose infected patients before they become severely ill and spread tuberculosis to others. 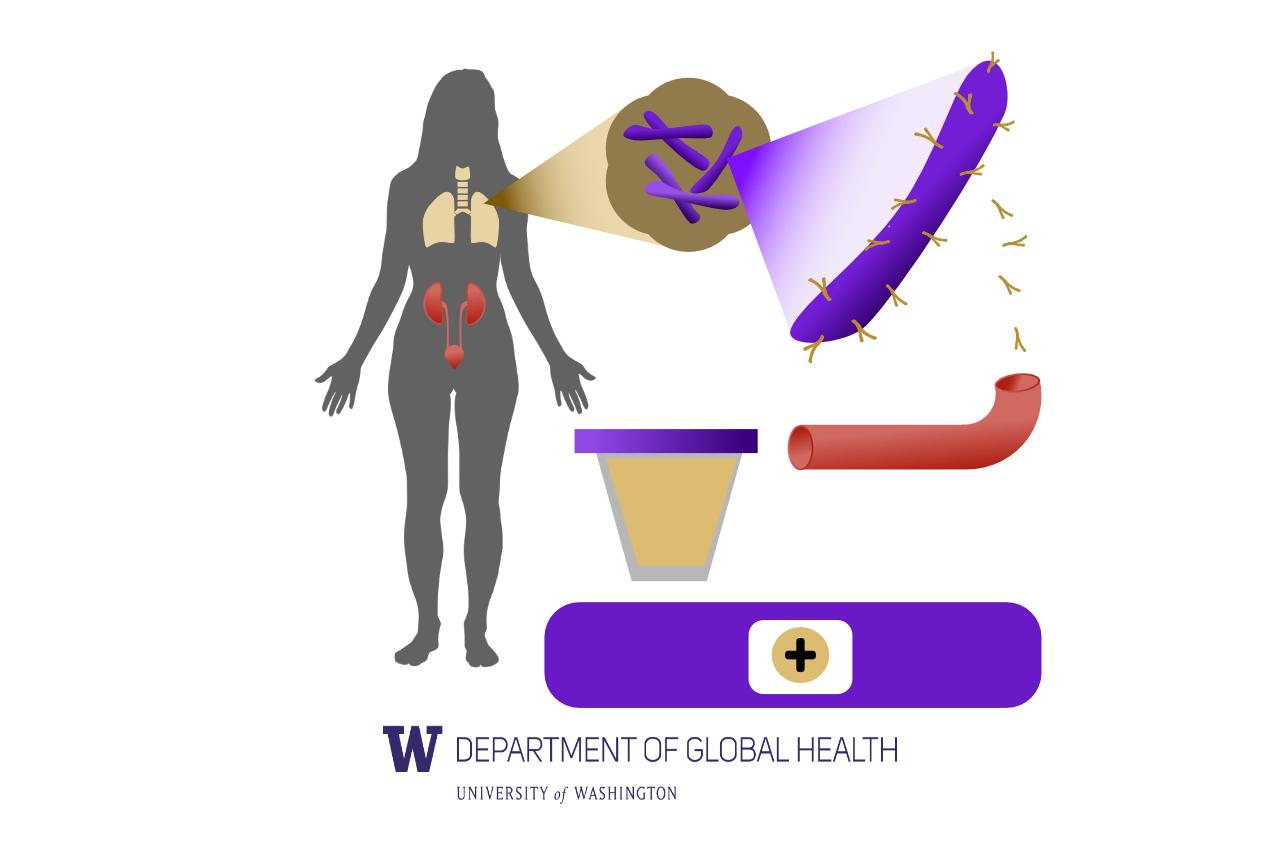 UW Department of Global Health
Because TB sheds a unique protein that is filtered by the kidneys, it's possible to diagnose TB with a urine test.

A lack of rapid, easy-to-administer tests to diagnose tuberculosis (TB) in affected communities has long been impeding efforts to eradicate the disease.  TB infects 10 million and kills over 1.5 million people each year.  Most people affected live in low- to middle-income countries.

Such “point-of-care” diagnostic tests are essential if TB transmission is to be interrupted and the disease eradicated, said Dr. Paul Drain, UW School of Medicine associate professor of medicine, Division of Infectious Diseases and of global health. “We need better tools to diagnose people quickly so they can be started on treatment before they become very ill and more likely to spread the infection to others.”

To develop such tests, the Bill & Melinda Gates Foundation has granted Drain and his colleagues a $4.7 million grant to evaluate and optimize rapid diagnostic tests that can be easily used in community clinics.

The most commonly used diagnostic tests used today require patients to cough up infected sputum. The sputum is stained with a special dye that highlights the tuberculosis bacilli so they can be seen under a microscope. Although this examination can be done quickly, it misses many cases. To catch those cases, the sputum may be cultured to see if the bacilli that cause tuberculosis, Mycobacterium tuberculosis, grows out of the sample.

But sputum-based tests have several drawbacks. First, the patient must be sick enough to be producing TB-laden sputum. This means they are already infectious and could have already infected others. Second, diagnosis is often delayed. M. tuberculosis grows slowly. It can be weeks until a culture may turn positive. During that time the patient may be becoming sicker and spreading the infection in the community. Finally, because sputum-based tests detect only the sickest patients, many less severe cases go undetected.

“We’re just catching the tip of the iceberg of infections spreading in a community with sputum-based tests,” Drain said.

Over the past ten years, quicker molecular tests have become available. In sputum samples, these can detect nucleic acids that are unique to TB. But these tests, too, have a major drawback. They require sophisticated laboratory equipment that small community clinics cannot afford or maintain. So samples must be sent to a central laboratory, and then the results must be sent back to the clinic. This delays the initiation of treatment and increases the risk that patients might be lost to follow up. Both situations could lead to more disease transmission.

“Proper diagnosis has to be timely so we can get people started on therapy quickly, which benefits the individual as well as their community,” Drain said.

With the support of the Gates Foundation grant, Drain and his colleagues will be working to see if nucleic acid tests can be developed that can be used in small clinics or by health workers in the community. Among the approaches they will be looking at are tests that don’t require a sputum sample, such as nasal or oral swab tests, similar to those used to diagnose SARS-CoV-2 infection in the home.

Drain and his collaborators, however,  are particularly interested in a component of the cell wall of TB, called lipoarabinomannan (LAM). LAM is shed by the bacilli and can be detected in urine.

“We hope to devise something that’s as simple as a urine pregnancy test and could be used in the community or home,” said Drain.

Besides ease of use, LAM-based tests would have other advantages. First, they can diagnose infections earlier than standard testing because they do not require that the patient be sick enough to produce sputum. Second, they can diagnose infections in patients in whom the bacilli have infected parts of the body other than the lungs, called extra pulmonary TB. Third, they detect infections in people who have no symptoms, so-called “subclinical TB”.

This last feature is particularly valuable in light of scientists’ evolving understanding of TB.

“We used to consider TB infections to be either latent or active," Drain said. "But research over the past decade has shown there’s no such thing as ‘latent’ tuberculosis. It’s never completely quiescent. The bacilli are still replicating, and though the immune system is still fighting them, the bacilli can still breakout and cause active infection.”

The new model sees TB infection as a continuum that can be divided into five categories:

Urine or blood-based nuclei acid or LAM tests could provide a way to identify which category a patient falls into, track the course of their disease and, if they need treatment, monitor their response to therapy, Drain said.

“If we can diagnose people faster, start them on treatment faster, we will be able cure these patients and reduce the rate of TB transmission in their communities,” Drain said.