In evaluation of performance and reputation, UW school trails only Michigan and North Carolina programs. 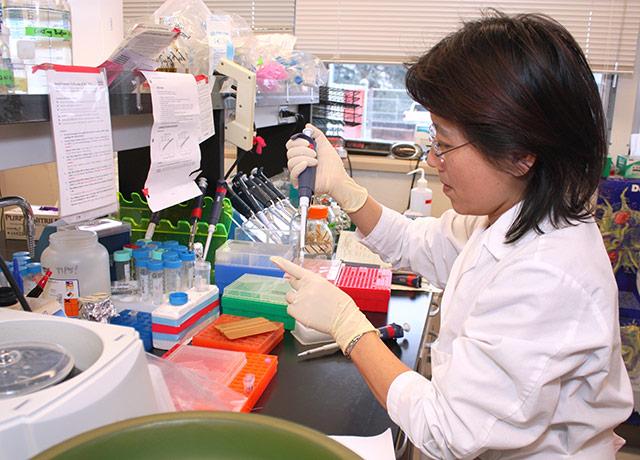 Steve Steinberg
A researcher works in a lab at the UW School of Dentistry.

The University of Washington School of Dentistry retained its No. 3 global and U.S. ranking in the newly released 2018 Academic Ranking of World Universities by the ShanghaiRanking Consultancy.

The rankings, which are weighted toward research performance and reputation, place the school behind only the dental schools of the University of Michigan and the University of North Carolina. Harvard University and King’s College London complete the top five in the category of dentistry and oral sciences. The annual rankings were originated by Shanghai Jiao Tong University in 2003.

Dr. Sara Gordon, the school’s associate dean of academic affairs, expressed pride in the school’s ranking and said: “Our faculty engage in compelling research within the school, and with partners in the university and around the globe. Pre-doctoral students can choose a research track that trains them in requisite skills, then places them in faculty labs, where they can complete a research project.”

Earlier this year, the school placed fourth in the United States and 14th in the world in the annual Quacquarelli Symonds World University Rankings assessment of dental schools. The British educational organization’s ratings also take research into account, but are a broader assessment than the consultancy's.

Gordon cited the school’s curriculum, which has been extensively revised in the last several years, as one reason for its standing.

“Our faculty members and staff have worked very hard over recent years to thoroughly revamp the curriculum,” she said. “The school aims to lead the world in producing dental graduates who are not only technically excellent but also have enhanced medical, interprofessional, and critical thinking skills necessary for the changing world of dentistry. We have an integrated systems-based biomedical foundations curriculum, a third-year clerkship skills program, and a comprehensive-care fourth-year program.”

The clerkship program takes third-year students through a series of six-week and 12-week clinical rotations designed to provide a more intensive exposure to the core skills of general dentistry. The fourth-year clinical program seeks to duplicate the wide-ranging experience of general dental practice.

School officials have cited the national dental board examinations as one indicator of the new curriculum’s value. In 2017 and 2018, the school’s fourth-year students recorded aggregate scores on the clinical proficiency portion of the exam that placed them in the nation’s top two or three classes.

Gordon also said: “The school has a strong emphasis on social responsibility, locally and as a partner in global health initiatives. All pre-doctoral students serve in community clinics for periods ranging from five weeks to five months.”