Biochemists have created "smart" proteins that function inside human cells by turning genes on and off. 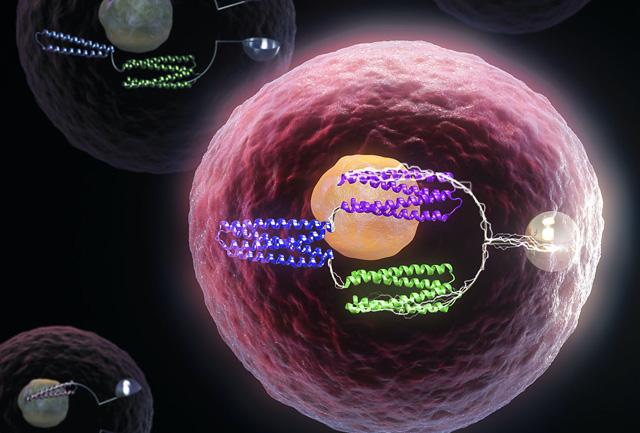 MolGraphics
In this conceptual illustration, living cells contain protein AND gates that have been designed to detect multiple signals to become bioluminescent.

The same basic tools that allow computers to function are now being used to control life at the molecular level. The advances have implications for future medicines and synthetic biology.

Reporting April 2 in the journal Science, a team led by the University of Washington School of Medicine has created artificial proteins that function as molecular logic gates. These tools, like their electronic counterparts, can be used to program the behavior of more complex systems.

The team showed that the new designer proteins can regulate gene expression inside human T-cells. This development may improve the safety and durability of future cell-based therapies.

"Bioengineers have made logic gates out of DNA, RNA and modified natural proteins before, but these are far from ideal. Our logic gates built from de novo designed proteins are more modular and versatile, and can be used in a wide range of biomedical applications" said senior author David Baker, professor of biochemistry at the UW School of Medicine and director of the Institute for Protein Design.

Whether electronic or biological, logic gates sense and respond to signals in predetermined ways. One of the simplest is the AND gate; it produces output only when one input AND another are present.

For example, when typing on a keyboard, pressing the Shift key AND the A key produces an uppercase letter A. Logic gates made from biological parts aim to bring this level of control into bioengineered systems.

With the right gates operating inside living cells, inputs such as the presence of two different molecules -- or one and not the other -- can cause a cell to produce a specific output, such as activating or suppressing a gene.

"The whole Apollo 11 Guidance Computer was built from electronic NOR gates," said lead author Zibo Chen, a recent UW graduate student. "We succeeded in making protein-based NOR gates. They are not as complicated as NASA's guidance computers, but nevertheless are a key step toward programming complex biological circuits from scratch."

Recruiting a patient's own immune cells in the fight against cancer has worked for certain forms of the disease. Nonetheless, targeting solid tumors with this so-called CAR-T cell therapy approach has proven challenging.

Scientists think part of the reason has to do with T cell exhaustion. Genetically altered T cells can fight for only so long before they stop working. There may be a way around this. With protein logic gates that respond to exhaustion signals, the team from UW Medicine hopes to prolong the activity of CAR T cells.

This work was led by researchers at the UW Medicine Institute for Protein Design. The research team also included biochemists from Northwestern University, The Ohio State University, Altius Institute for Biomedical Sciences and University of California San Francisco.

This news release was written by Ian Haydon of the UW Medicine Institute for Protein Design.