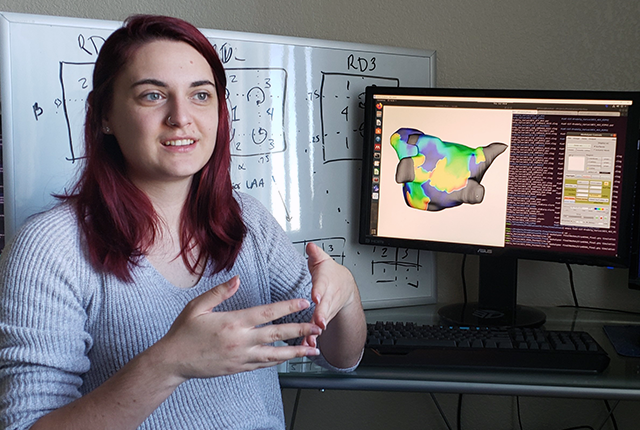 University of Washington scientists have shed light on why some people who have a stroke do not also have abnormal heart rhythms, even though their hearts contain similar scar tissue.

Their results, published today in eLife, could help identify the best treatments for people who might be at risk of recurrent stroke, new heart disorders, or both.

Strokes are often caused by abnormal blood flow resulting from rapid, irregular beating in the upper chamber of the heart. This is also called atrial fibrillation (AFib). But some people have strokes that appear to have been caused by the heart, yet there is no evidence of AFib.  In fact, around 25% of strokes fall into this group, called embolic strokes of undetermined source (ESUS).

“The absence of rhythm disorders in these people is confusing because we know that both atrial fibrillation and ESUS are associated with the buildup of a similar level of scar tissue in the heart,” explained first author Savannah Bifulco, a UW graduate student in bioengineering.  “We wanted to test whether there is some fundamental difference in the scar tissue between these two groups of patients that might explain why AFib patients suffer from rhythm disorders but ESUS patients do not.”

The team developed 90 computer-based models using magnetic resonance imaging (MRI) scans from patients: 45 models were derived from patients who had a stroke of undetermined source and 45 from those who had AFib and had not yet received treatment.

They compared the amount and location of the scar tissue in the upper-left heart chamber across all samples and then used simulations to test whether it was still possible to trigger an abnormal heart rhythm.

“Using real patient MRIs, we created computerized models of the hearts of patients who have had a stroke, but do not have AFib. We then ran those models through a battery of virtual stress tests we originally designed to help understand the effects of disease-related atrial changes in patients who did have AFib,” said co-senior author Patrick Boyle, a UW assistant professor of bioengineering. He leads the Cardiac Systems Simulation Lab.

“Interestingly, we found that models from ESUS and AFib patients were equally likely to be affected by this arrhythmia initiation protocol. This is surprising, because it suggests ESUS and AFib patients have the same proverbial tinderbox of fibrotic remodeling. We believe the implication is that these stroke patients are only missing the trigger to start the fibrillation process – the spark to light the fire,” Boyle said.

Undetectable AFib is thought to be a potential cause of ESUS, and all people who have had a stroke of undetermined source are usually monitored for AFib and started on a course of aspirin anti-clotting drugs to prevent another stroke. If AFib is detected, stronger anti-clotting drugs would be recommended.

As with all treatments, these drugs come with side effects and risks of their own, it is important to know who really needs them. Yet only 30% of ESUS patients ever show evidence of AFib, making it impossible for clinicians to know which patients should be treated as high-risk for AFib and which ones are better with monitoring alone. Now the team is moving toward using this modelling approach for stroke and arrhythmia risk stratification in potentially vulnerable groups.

“By using these tools of advanced imaging, computational power and outcomes data to create robust and validated computational models of arrhythmia, we're paving the way towards a better understanding and gaining valuable insights into the nature of each individual's disease course,” said co-senior author Dr. Nazem Akoum of UW Medicine's Heart Institute, where he directs the care of patients with atrial fibrillation.

“Our goal is to make computational modelling more integrated into how clinical decisions are made, placing what we see in simulations alongside many other factors like medical co-morbidites, diagnostic tests and family history. We want to help clinicians wring every last drop of information and insight from these images to help them paint the most complete picture possible for their patients,” Akoum added.

This news release was written by Emiy Packer.