Finding helps explain how baseball players can connect with a 100-mph fastball and how the rest of us manage everyday tasks. 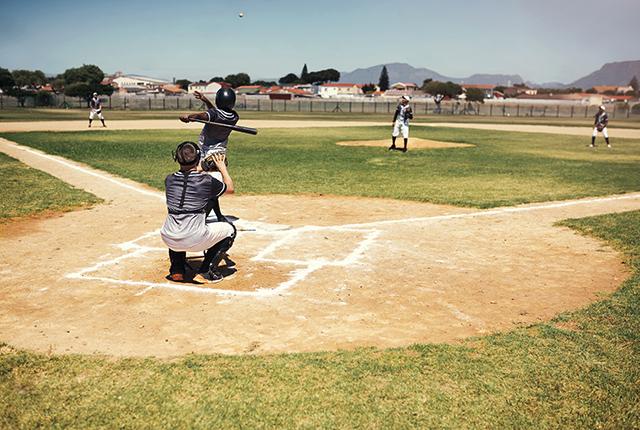 Getty Images
To hit a baseball, your eyes and brain work in concert to predict its path.

Neural circuits in the primate retina can generate the information needed to predict the path of a moving object before visual signals even leave the eye, UW Medicine researchers demonstrate in a new paper.

“The ability to predict where moving objects will go is so important for survival that it’s likely hardwired into all sighted animals,” said Michael Manookin, an assistant professor of ophthalmology at the University of Washington School of Medicine. He led the research team with Fred Rieke, professor of physiology and biophysics.

Manookin and his colleagues report their findings in the journal Nature Neuroscience.  Belle Liu and Arthur Hong, two UW undergraduate students, were the lead authors on the paper.

In the study, the researchers looked at how motion was processed by cellular circuits in the retina. The circuits the researchers focused on are composed of light-sensing photoreceptor cells, called cones; an intermediate layer of cells, called bipolar cells; and ganglion cells that collect signals from bipolar cells and transmit these signals out of the eye to other brain regions.

To understand how this was done, the researchers projected patterns that appeared to be moving away from, and toward, the retina and recorded the signals being generated by the ganglion cells in response to the movements.

They then analyzed the signals to see if the ganglion cells were generating what is called “predictive motion encoding" – that is, patterns that reflect information that could be used to predict the future motion of an object.

“For example, if you present a movie of a ball moving across the visual field, you can record the spikes coming from the ganglion cell in response to that movie,” Manookin explains. “Then you can calculate how much information the spikes contain about where the ball is likely to be in the future.”

“That the retina, with such simple hardware, is doing these calculations so efficiently is just remarkable,” Manookin said.

The researchers found that the circuits can extract this information because of crosstalk between the bipolar cells. Bipolar cells are in close contact with adjacent bipolar cells. If one becomes excited by signals from its photoreceptor cells, in addition to sending a signal to the ganglion cell, it also passes some of that excitement along to its neighboring bipolar cells.

The neighboring cells are then “primed” so that, if they also receive signals from their photoreceptor cells, they are more likely to send a strong signal to the ganglion cell. In this way, as a moving object passes over the visual field, the information about that movement “ripples” through the network of bipolar cells.

“A 90 or 100 mile per hour fastball can travel more than seven feet before the signals gets out of your retina,” Manookin said. “To hit the baseball, you have to be able to predict where it will be in the future. This ability to predict the movement of objects in our environment is also needed in everyday activities like driving a car or even walking. It’s an ability so important to survival that evolution has hardwired it into our nervous system.”

Ultimately, this knowledge of how the retina processes information can be used to develop technologies for restoring meaningful vision to people suffering from blindness, Manookin said.