NIH-funded center to study nucleome in time and space

NIH-funded center to study nucleome in time and space

Changes observed in the nuclei of cells emerging in mouse embryos will chart genomics of mammalian development. 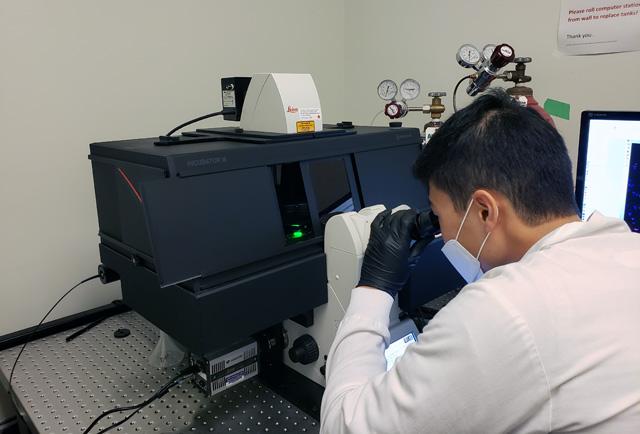 The dynamic genomic configurations and activities inside the nuclei of cells during mammalian embryonic development will be studied at a new UW Medicine research center.

The National Institutes of Health announced Oct. 15 a $10 million, five-year grant for a 4-Dimensional Genomic Nuclear Organization of Mammalian Embryogenesis Center at the University of Washington School of Medicine in Seattle.

The center is one of several across the United States. These 4D Nucleome centers will explore changes in the organization of the nucleus, in both its 3-dimensional architecture and its functionalities, over time in living cells and systems.  The DNA packaged inside cells can alter its shape or move into other positions. This can affect gene expression.

For example, researchers might look at which genes are turned on or off during various periods, or what DNA sequences are being exposed for de-coding. They could then try to see how that influences the cells’ destinies.

The UW Medicine center will compile a high resolution atlas, based on its 4D nucleome analyses, of mouse embryonic development.  The atlas will be made  openly available to the scientific community.

“The different types of data will be integrated,” the UW Medicine researchers noted, “including cross-species imputation with human data, as well as models and navigable maps applied to pathways relevant to mammalian development.”

The NIH Common Fund supports the national 4D Nucleome research effort.  Across the country. various centers will cover different aspects in their gathering  and sharing of extensive data about how the nucleome operates. Groups will look at the nucleome in health, in beginning of new lives, during growing up and aging, in repairing the body, and in major diseases such as cancer, where cells go awry and can migrate to other organs.

They will be joined by five UW School of Medicine co-investigators: Xinxian Deng of Laboratory Medicine and Pathology,  Zhijun Duan of Medicine, Division of Hematology, and Cole Trapnell, Doug M. Fowler and Brian Beliveau, all of Genome Sciences.

This is the second phase of the national initiative. UW Medicine completed its first five-year 4D Nucleome consortia program through its 4D Nucleome UW Center for Nuclear Organization and Function. Many of the methods they will tap into in the next phase are now all well-established and mostly developed in the researchers’ own labs.

The researchers mentioned that the past decade has witnessed a quick succession of advances in the fundamental understanding of the three-dimensional organization of the nucleus in space and time.

They added, however, a major shortcoming is that most of these investigations have been conducted in cell lines in test tubes, rather than in living systems.

“One of the most dynamic living systems is embryonic development, during which the nucleome shapes and is shaped by the myriad of mammalian cell types,” they noted.  These cells appear over hours, days and weeks.  New technologies now offer scientists ways to explore the orchestration of their emergence.

The UW Medicine scientists hope to close some of the massive gaps in understanding these dynamics by generating systematic datasets on nuclear morphology and associated molecular measurements in mammalian tissues and cell types.

“In mammalian development, an exponentially dividing mass of cells gives rise to different cell types executing highly distinct, well-defined programs of gene expression from a single genome,” the researchers explained.  “Although a reasonable amount is known from classic developmental biology, this knowledge is poorly connected to genomics.”

The new center’s approaches will follow nuclear structure, chromatin and gene expression changes at a whole organism scale in the mouse embryo, a longstanding model of prenatal development. The research will use a combination of scalable single cell profiling and visual cell sorting methods.

"Individual cells vary greatly in which genes are expressed and to what levels," explained Beliveau, whose lab has been studying how chromosomes are organized in the cell nucleus, and what this means for DNA transactions.  "By mapping gene expression and its consequences in single cells within embryos using microscopy, we may gain a deeper understanding into how diverse cell types work together to ensure proper development."

Note to reporters:  An animation from the Trapnell and Shendure labs explaining their approaches to analyzing the single-cell, transcriptional landscape during mammalian embryonic organ development is availalble for viewing.