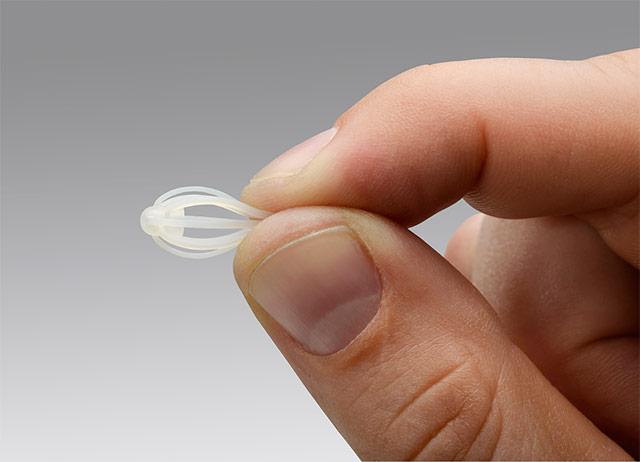 Intersect ENT
The polymer devices are implanted in the ethmoid sinuses, which sit between the patient's eye sockets.

A UW Medicine surgeon performed a landmark procedure this week, implanting tiny steroid-releasing devices in a patient’s sinuses to reduce the recurrence of nasal polyps. It was the device’s first West Coast deployment and the third such U.S. procedure since the FDA approved the device for commercial use in December 2017.

Polyps are masses that can emerge in sinus and nasal tissue among people with chronic sinusitis. They affect about 4 percent of the general population and their cause is unknown, though they are more common among people who have allergies, asthma, and aspirin sensitivity. Polyps are usually painless but often obstruct breathing and can cause sinus infections and inhibit sense of smell.

Nasal steroidal sprays are first-line medical treatments, but some polyps do not readily respond or they grow to such size that surgery is recommended to remove them. More than 500,000 people in the United States have sinus surgery each year. Polyps can recur, and when they do, these patients often need revision surgery. The new implant is designed to be a less invasive option.

The polymer implant is made by Intersect ENT of Menlo Park, California. It is shaped like a tiny badminton birdie and releases mometasone furoate, a steroid, directly into the sinus lining for up to 90 days. It softens over time and is later removed by an otolaryngologist.

Russell Hollek, 32, of Shoreline, Washington, was the first West Coast recipient of the commercial device.  Sinus problems started in his teenage years, he said, and then polyps came about six years ago. He had polyp-removal surgery in mid-2017.

“As my polyps get worse, I can’t smell or taste,” Hollek said. “I’ve been miserable for a long time. Surgery made it better than it has been in years, but it’s still pretty bad.”

He received the implants March 14 from Dr. Greg Davis, an associate professor of otolaryngology-head and neck surgery at the University of Washington School of Medicine.  Davis implanted a device in each of Hollek’s ethmoid sinuses, which abut the nasal septum near the eye sockets. Hollek was awake for the in-clinic procedure.

Hollek was attracted by the device’s 90-day lifespan. “Short-term use of steroids is fine, but when you pop them like candy just to breathe, that’s not a good thing,” Hollek said.

Davis said the implant delivers steroids to the location of polyps more effectively than steroid sprays. Current standard therapy for post-surgery patients is twice-daily sinus irrigation with a neti pot containing saline water and a steroid. "But a lot of patients find that inconvenient,” he said.

Davis said one of his patients has a month-trip planned in the Himalayas after sinus surgery for polyps. Another is a freelance photographer who will be on assignment in Africa for two months. “Neither of those guys would be able to irrigate their sinuses predictably, so this is a nice option for them.”

The U.S. Food and Drug Administration approved the device after Phase III test results showed a 90-day reduction in nasal congestion and polyp burden among adults with chronic sinusitis. Many trial subjects who had the implant no longer thought they needed revision surgery, the study reported. Those results were announced by the manufacturer in October 2017 and published in January.