A SpaceX cargo launch slated for Thursday, June 3, will deliver an experiment on kidney stone formation in microgravity. 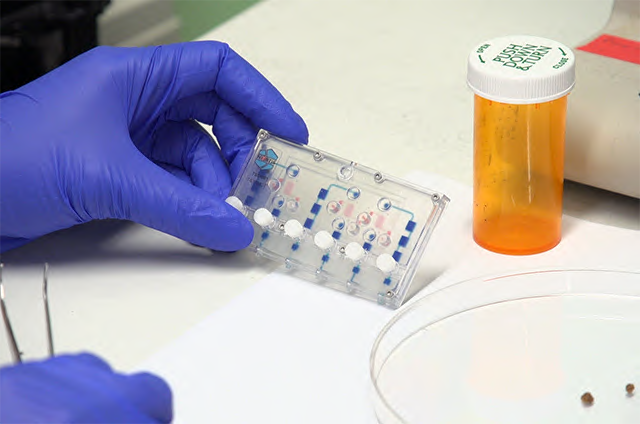 Kiyomi Taguchi
A kidney tissue chip like the ones that will be launched to the International Space Station to study kidney stone formation. Kidney stones can be seen in lower left of photo.

Miniaturized chips containing live, human kidney cells will be on board the scheduled June 3 Space X cargo supply Mission 22 to the International Space Station.  Inside the 3D chips, the cells are kept alive in a tiny system that delivers fluids dynamically.  These tissue chips model responses that take place along the hard-working tubules of kidneys.

The flight carrying these tissue chips marks the second voyage of a space research program from the University of Washington School of Pharmacy, the Kidney Research Institute, and UW Medicine.  Their first set of kidney tissue chips launched to the Space Station May 4, 2019, with a return flight splashdown and recovery June 10, 2019.

The scientists are using the microgravity of space as an unusual environment, not available on Earth, to study the genesis of certain kidney diseases and related disorders, and how kidneys age.

Astronauts on long assignments in space can become prone to kidney stones, altered urine chemistry, and rapid aging of their kidney cells. As missions to return to the Moon are planned, and a journey to Mars is considered, pre- and in-flight protections against kidney disease, and treatments that can be administered en route will be vital.

But the research has public importance far beyond space flight. Sending kidney tissue chips to space is a way to learn, in a speeded-up time frame, about the genesis of medical conditions such as protein in the urine, bone loss, and kidney stones.

The scientific results of these space experiments could suggest new ways to prevent and treat these disorders in people who have never ventured into orbit.  Kidney diseases – and some life-saving treatments like dialysis– can be debilitating. Better therapeutic options are needed for the millions of people who are, or will be, affected by the kidney diseases being studied through this space research program.

The kidney on a chip microphysiological system developed by UW. and its partners at other research institutions and biotech industries, is also being used in preclinical drug development and toxicity testing in Earth-based labs.

The lead scientists on the kidney tissue chips in space project are Edward Kelly, associate professor of pharmaceutics and co-director of the Pharmaceutical Bioengineering Program at the UW School of Pharmacy and Catherine Yeung, UW assistant professor of pharmacy and an investigator at the Kidney Research Institute, which is a collaboration between Northwest Kidney Centers and UW Medicine.  Kelly and Yeung are joined in leading the project by  Jonathan Himmelfarb, professor of medicine, Division of Nephrology who directs the Kidney Research Institute, the Center for Dialysis Innovation and the Kidney Precision Medicine Project. Several other scientists, as well as graduate and undergraduate students, are also involved in this experiment.

It’s “indescribable in terms of level of excitement” to be sending an experiment back to the International Space Station says co-chief scientist Kelly.

This time, the researchers will be sending 24 of the credit-card size chips, which will contain fluid micro chambers lined with human-derived kidney cells from six donors, to explore why kidney stones form.

“NCATS is looking forward to seeing the next launch of kidney tissue chips taking place,” said translational neuroscientist Lucie Low, scientific program manager for the Tissue Chip for Drug Screening program at the National Center for Advancing Translational Sciences (NCATS), part of the National Institutes of Health. “This research in microgravity offers unparalleled opportunities to accelerate the pace of research into kidney diseases and aging that can benefit everyone on Earth.”

Prior to the trip to Florida for the Cape Canaveral launch, students at UW have been in the lab forming microcrystals that can lead to kidney stones and collecting donor kidney cells for more than a year in preparation for the space experiment.

On the International Space Station, the astronauts running the experiment will pump the micro-crystal infused fluid through the device and then collect the fluid that exits. That kidney chip “urine” will then be tested for biomarkers from the cells.  These markers might signal why kidney stones are formed in roughly one in ten people.

The Tissue Chips in Space Initiative is a collaboration between NCATS and the International Space Station National Lab.  Other UW and UW Medicine bioengineers and their research partners have previously also sent heart tissue experiments to the Space Station as part of this program.

The NCATS grant for this kidney chip in space study is under project 5UH3TROO2178-04 and a Diversity Supplement 2UHTROO2178-04S1 to foster a more diverse scientific community through research support.

The implementation partner for this study is BioServe Space Technologies.

Watch the pre-launch briefing and launch of NASA’s Space X CRS-22 commercial cargo on NASA TV, available on the web.  The liftoff date and time are subject to change to a later slot, if weather and other conditions do not permit a safe launch.

Below is the SpaceX Dragon spacecraft on the 21st ISS re-supply mission (NASA photo): 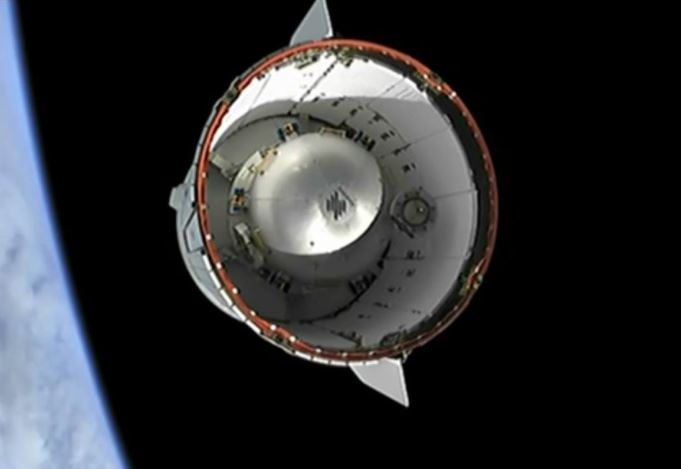