Findings suggest men undergoing cancer-risk genetic testing should be tested for mutations in this gene as well. 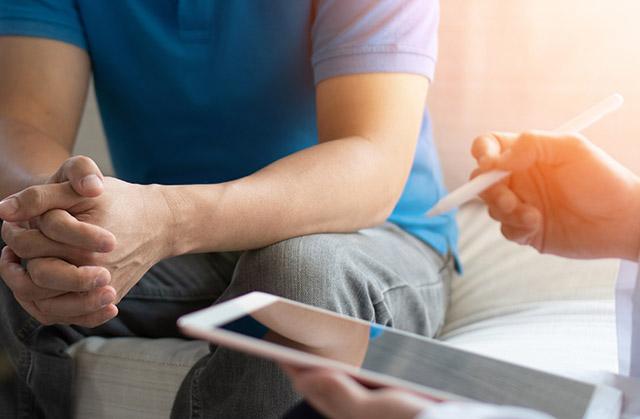 Getty Images
Men being tested for cancer-risk genes, perhaps because of a family history of cancer, should be tested for TP53 variants.

Men who inherit mutations in a gene called TP53 have a high risk of developing aggressive prostate cancer, a multicenter research team in the United States has found.

The findings were reported in the journal European Urology. Researchers from more than a dozen institutions across the United States collaborated on the study. Dr. Kara N. Maxwell, assistant professor of medicine at the Perelman School of Medicine at the University of Pennsylvania is the paper’s lead author.

The TP53 gene instructs cells to make tumor protein 53. This protein detects damaged DNA and determines if the DNA can be repaired. If it can, the protein initiates the DNA-repair process. If it cannot, the protein triggers a process that causes the cell to self-destruct, preventing it from replicating with damaged--and potentially cancer-causing--DNA.

“TP53 is a tumor suppressor gene that by detecting DNA damage serves as the ‘Guardian of the Genome. But mutations in TP53 commonly develop in cancers, and when its protection is lost the cancers can go wild,” said Dr. Colin Pritchard, professor of laboratory medicine and pathology at the University of Washington School of Medicine.  He is also a researcher at the Brotman Baty Institute for Precision Medicine in Seattle. Pritchard was the corresponding author for the study.

Harmful mutations in TP53 also can be inherited and cause a rare condition called Li-Fraumeni syndrome, named after Drs. Frederick Li and Joseph Fraumeni from the U.S. National Cancer Institute who first described it in 1969.

People with LFS tend to develop multiple cancers starting in childhood. Although the syndrome is associated with many different types of cancer, including some in breast, bone and soft tissues, such as muscles, the effect of TP53 variants on the risk of prostate cancer was unknown.

To find out the role of TP53 variants, the researchers looked at the incidence of prostate cancer in a group of men with LFS and the prevalence of inherited TP53 mutations in men with prostate cancer.

In the group of 163 men with LFS, the researchers found that 31 had had prostate cancer and, of the remaining 117 men who did not have the cancer when they were initially tested, six more were diagnosed with the disease in the next seven years. The results indicate that men with LFS had a 25-fold increased risk of prostate cancer compared to the general male population.

Among the nearly 7,000 men they studied who had had prostate cancer, 38 had inherited a deleterious TP53 variant. Although this appears to be a small number, the rate was 9-times higher than that seen among men who did not have prostate cancer.

What’s more, the men who had the variants tended to be diagnosed at a relatively young age and have aggressive forms of the cancer. At the time they were diagnosed the cancer had already spread outside of the prostate, a stage of disease when the cancer is no longer curable, in one in three of the patients.

“That rate is way higher than is seen in the average prostate cancer population,” Pritchard said. “In fact, it’s fairly rare to be diagnosed with prostate cancer at such a late stage.”

The connection between TP53 variants and prostate cancer in LFS patients may have gone undetected because, for many years, these patients typically did not live long enough to develop the disease, according to Pritchard.

“Prostate cancer is a disease of older men," he said. "But now, with screening, many men with Li-Fraumeni syndrome are living into their 40s, 50s, 60s and 70s, when the risk of prostate cancer is higher.”

The findings indicate that men with Li-Faumeni syndrome should be routinely screened for prostate cancer when they have at least 10 years of life expectancy, with such tests as the commonly used prostate specific antigen (PSA) test, Pritchard said. Currently, this is not routine.

The findings do not indicate that every man undergo genetic testing for TP53, Pritchard added, but those who are being tested for cancer-risk genes, perhaps because of a family history of cancer, should be tested for these TP53 variants as part of the screening.