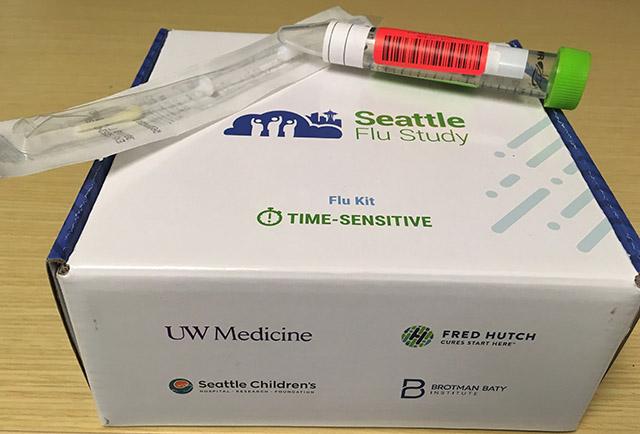 Home-based, self-administered tests for influenza are comparable in accuracy to rapid diagnostic tests in clinical settings, according to a recently published, peer-reviewed study.

“Home tests are a valuable tool to support the management of influenza and other respiratory infections,” said Matthew J. Thompson, professor of global health and family medicine at the University of Washington School of Medicine in Seattle. Thompson is the senior author on the study and a primary-care physician at UW Medicine.

“The tests facilitate earlier diagnoses and reduce the time from the onset of symptoms to patients seeking appropriate care,” he said.

More than 600 Seattle-area residents participated in the 2020 study between February and the end of May. Participants were mailed influenza testing kits. After swabbing their noses, they either recorded the results through an app, or returned the kits to the lab of Lea Starita in the Brotman Baty Institute of Precision Medicine. Starita is an assistant professor of genome sciences at the UW School of Medicine, and one of the study co-authors.

The researchers determined that sensitivity and specificity of the self-test were comparable with those of influenza rapid diagnostic tests used in clinical settings. False-negative results were more common when the self-test was administered after 72 hours of the appearance of symptoms, but were not related to inadequate swab collection or severity of illness.

“This study underscores the imperative of expanding access to testing and lowering the costs,” said Barry Lutz, another co-author of the paper.  Lutz is an associate professor of bioengineering in the UW College of Engineering and School of Medicine.  He is also a Brotman Baty Institute investigator.

“As we have witnessed during the COVID pandemic,” Lutz said, “rapid and accurate testing can lower the incidence of infection, locally, nationally, and globally.”

Pandemic coronavirus SARS-CoV-2 testing was not included in this study, which covered influenzas A and B. The research was part of the Seattle Flu Study, a collaborative effort led by the Brotman Baty Institute, which involves UW Medicine, Fred Hutchinson Cancer Research Center, and Seattle Children’s Hospital.

According to the U.S. Centers for Disease Control and Prevention, the most recent influenza season in the United States, between October of 2019 and April of 2020, led to 38 million illnesses, 18 million medical visits, 405,000 hospitalizations, and 22,000 deaths. In comparison, the Centers for Disease Control and Prevention reports that between Sept. 28, 2020 and May 22, 2021 in the United States, 1,675 (0.2%) of 818,939 respiratory specimens tested by U.S. clinical laboratories were positive for an influenza virus.

Many scientists have concluded that Americans taking precautions against COVID made significant contributions to lowering levels of influenza.

Funding for this research, as well as the Seattle Flu Study, was provided by Gates Ventures, the private office of Bill Gates.

The paper, which appeared Feb.2 in JMIR Public Health and Surveillance, is titled “Diagnostic Accuracy of an At-Home, Rapid Self-test for Influenza: Prospective Comparative Accuracy Study.”

The lead authors were Rachel Geyer of the UW Department of Family Medicine and Jack Henry Kotnik, of the UW departments of family medicine and bioengineering.