Glasses to stop myopia are successful in multi-site trial

Glasses to stop myopia are successful in multi-site trial

The glasses were created by scientists Jay and Maureen Neitz and ophthalmology colleagues at the University of Washington School of Medicine. 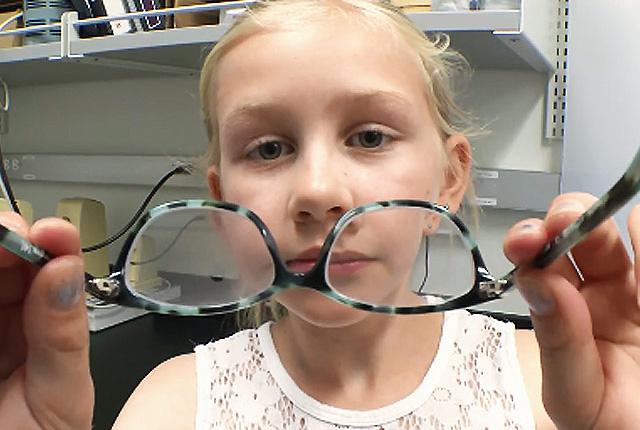 UW Medicine
Kayla Radovitch, 11, enrolled in an earlier trial, said the glasses worked for her.

Update Jan. 20, 2021: The North America myopia trial is nearing the end of its second year and it is closed to enrollment.  Based on the one-year data, the eyeglasses have regulatory approval to be sold as medical devices in Europe and Canada.  They are currently being sold in Canada under the brand name "Kikko."  Researchers anticipate regulatory approval in the United States in about a year that will be based on the two-year results.  People can go to the Kikko website https://kikkovision.com/  and sign up to receive updates about U.S. availability.  Once they are approved in the U.S., people will be able to buy the glasses from their optometrist or ophthalmologist.

Glasses to stop myopia or nearsightedness in children have been shown to work in a multi-site trial of 256 children and will go on sale later this year outside the United States.

The glasses are the vision of scientists Jay and Maureen Neitz and ophthalmology colleagues at the University of Washington School of Medicine.

The three-year trial known as CYPRESS (Control of Myopia Using Peripheral Diffusion Lenses: Efficacy and Safety Study) is a prospective, multi-center, subject- and observer-masked, randomized, controlled pivotal clinical study. The participants are 256 children aged 6-to-10 years old across 14 trial sites in the United States and Canada.

After a year, the trial showed a reduction in myopia progression of 59 percent and 74 percent, according to a white paper published in Review of Myopia Management.

“For the very first time there are glasses that, when you wear them, actually slow or even stop the progression of myopia,” said Jay Neitz, who is also co-founder of SightGlass Vision Inc. of Palo Alto, Calif., which is focused on ending myopia.

Trial participants are using one of three types of lenses instead of their normal glasses: control lenses or one of two test lens designs. After their assessments at baseline, participants are followed for progression of myopia over 36 months.

The FDA requires three years of data before the glasses can be considered a medical device that prevents myopia. But outside the United States, the glasses are eligible for a CE certification that indicates conformity with health, safety, and environmental protection standards for products sold within the European Economic Area. The CE marking is also found on products sold outside the EEA that have been manufactured to EEA standards. The glasses are scheduled to be available in Europe and Canada later this year or early 2021.

Nearsightedness or myopia is a condition that occurs when the light coming into an eye does not focus on the retina, but in front of it, making things look blurry.

Approximately half of all young adults in the U.S. and Europe are nearsighted – double the number from when their grandparents were the same age. In China, about 80-90% of teens and young adults are myopic, up from 10-20% 65 years ago.

This increase is thought to relate to lifestyle changes, including less time outdoors and more eye-straining or near work-related activities such as reading and screen time. Early intervention is key to preventing high myopia from developing.

For the Neitzes, the trial results follow a lifetime of trying to find the cause of myopia and how to end it.

Their big breakthrough in understanding myopia occurred in 2008 when they studied a particular group of people who had a genetic form of myopia that’s very severe. They discovered a gene mutation that was causing the myopia.

“It turns out it was a mutation in the cone photoreceptors,” said Jay Neitz. “We then realized that it’s really just the way that the images are being encoded on the retina.”

What’s supposed to happen as your eye grows, is that things should begin to go out of focus in the periphery  of your vision.  That’s a signal for the eyes to stop growing.

But as long as things are still clear in the periphery, the eyes think this person must still be farsighted, because in the natural world things in the periphery are far away.

Neitz said his team was able to design a lens to make central vision clear and in focus, and give the peripheal vision much lower contrast.

“It recreates what is supposed to be going on with our eyes before we started putting all of these things in front of our face like computer screens and tablets,” he said.

The study was funded by SightVision but designed in consultation with the Food and Drug Administration. SightGlass Vision employees are not involved in the study.  Study results were decoded by an unbiased third party and securely communicated to SightGlass Vision but the identities of study participants are not known by the company.