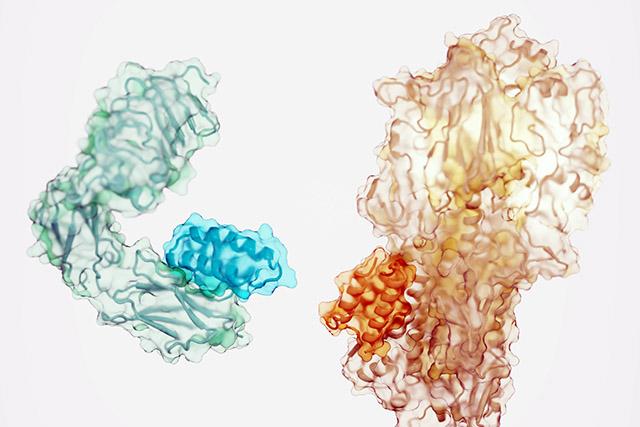 Ian C. Haydon/Institute for Protein Design
Small proteins (darker shade) designed to bind to the insulin receptor (left) and a component of the influenza virus (right).

A team of scientists has created a powerful new method for generating protein drugs. Using computers, they designed molecules that can target important proteins in the body, such as the insulin receptor, as well as vulnerable proteins on the surface of viruses. This solves a long-standing challenge in drug development and may lead to new treatments for cancer, diabetes, infection, inflammation, and beyond.

The research, appearing today in the journal Nature, was led by scientists in the laboratory of David Baker, professor of biochemistry at the University of Washington School of Medicine and a recipient of the 2021 Breakthrough Prize in Life Sciences.

“The ability to generate new proteins that bind tightly and specifically to any molecular target that you want is a paradigm shift in drug development and molecular biology more broadly,” said Baker.

Antibodies are today’s most common protein-based drugs. They typically function by binding to a specific molecular target, which then becomes either activated or deactivated. Antibodies can treat a wide range of health disorders, including COVID-19 and cancer, but generating new ones is challenging. Antibodies can also be costly to manufacture.

A team led by two postdoctoral scholars in the Baker lab, Longxing Cao and Brian Coventry, combined recent advances in the field of computational protein design to arrive at a strategy for creating new proteins that bind molecular targets in a manner similar to antibodies. They developed software that can scan a target molecule, identify potential binding sites, generate proteins targeting those sites, and then screen from millions of candidate binding proteins to identify those most likely to function.

The team used the new software to generate high-affinity binding proteins against 12 distinct molecular targets. These targets include important cellular receptors such as TrkA, EGFR, Tie2, and the insulin receptor, as well proteins on the surface of the influenza virus and SARS-CoV-2 (the virus that causes COVID-19).

“When it comes to creating new drugs, there are easy targets and there are hard targets,” said Cao, who is now an assistant professor at Westlake University. “In this paper, we show that even very hard targets are amenable to this approach. We were able to make binding proteins to some targets that had no known binding partners or antibodies,”

“We look forward to seeing how these molecules might be used in a clinical context, and more importantly how this new method of designing protein drugs might lead to even more promising compounds in the future,” said Coventry.