Small study is first to employ functional MRI to visualize brain activation before and after chemical-aversion therapy. 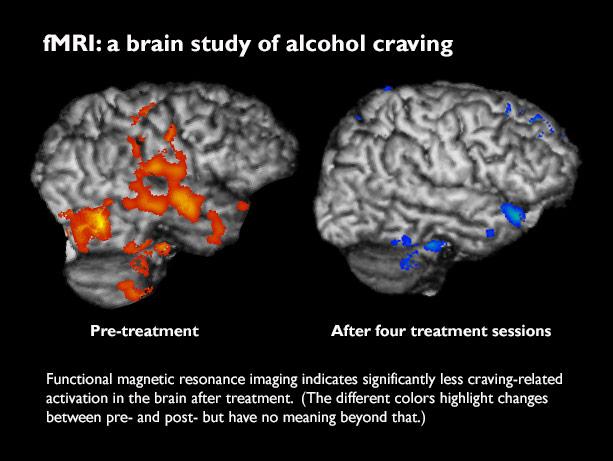 Chemical aversion therapy shows promise as a way to curb alcohol abuse among heavy drinkers, according to findings published by Schick Shadel Hospital and UW Medicine researchers in Seattle.

“Among organizations that treat alcohol abuse, there is growing awareness of the importance of craving,” said Ralph Elkins, Schick Shadel’s director of research. “Craving was recently added as one of the defining criteria for diagnosing alcohol use disorder in the DSM-5,” healthcare providers’ authoritative manual for diagnosing mental conditions.

fMRI scans taken before and during 10 days of Schick’s in-house treatment showed significant changes in brain activity among the 13 study subjects.

The sense of craving

People with alcohol-use disorder experience pleasure and a sense of reward when they drink, and learn to associate alcohol with various people and situations. The brain encourages the repetition of this behavior.

“When someone tries to quit drinking alcohol, he may see others enjoying alcohol in those familiar circumstances, which activates his brain’s pleasure center and can lead him to fantasize about drinking again. That can cause a sober person to crave alcohol,” Elkins said.

Fortunately, the human brain also has evolved mechanisms of repulsion and aversion to actions that lead to feelings of physical illness; for example, people quickly learn to avoid poisonous foods and other foods that make them nauseous.

Schick’s treatment is designed to reduce craving by activating these aversion mechanisms in the brain. It trains patients to associate alcohol consumption with nausea and vomiting.

Before the treatment began, the 13 study participants had self-reported alcohol abuse lasting 18 years, on average. One year after in-house treatment ended, nine of the 13 reported that they had successfully abstained from alcohol and that it still repulsed them.

How fMRI was applied

Functional MRI detects brain activity – changes in blood oxygen levels, specifically. Each study subject underwent two fMRI scans: before treatment began and after the fourth (of five) treatment sessions at Schick Shadel. Each subject also answered survey questions about their senses of craving before, during and after treatment.

UW Medicine neuroimaging scientist Todd Richards administered the scans, instructing each patient to imagine two scenarios: one with a bottle of their favorite alcohol and one in their favorite non-alcohol setting. Those cues were alternated every 30 seconds, yielding a composite image of activity to represent alcohol craving.

“The brain does not lie,” Richards said. “The activation pattern tells whether someone is craving, and our scans confirmed what the patients were reporting about less feelings of craving.”

Changes between the pre- and post-treatment scans show “significant reductions in craving-related brain activity in the occipital cortex,” a region of the brain previously associated with alcohol craving, Richards said.

The data, Hoffman said, suggest that chemical-aversion treatment is effective for alcohol-use disorder, but the study’s small scale and the lack of a control group underscore that more research is needed.