In a study of mice, "flash" radiotherapy condensed minutes of treatment into less than 1 second, with no harm to healthy tissue. 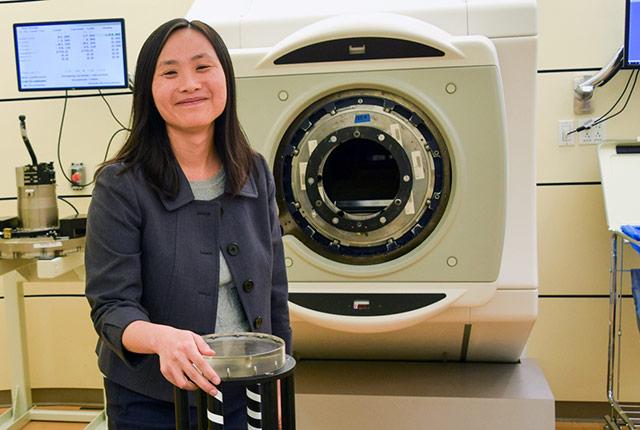 Radiation oncologists face cancer’s grim adversity every day. They use cold data to plan treatments that kill patients’ tumor cells and do the least collateral damage to healthy tissue.

In that sober, exacting head space, it was easy to understand Dr. Jing Zeng’s jubilation as she described a recent technology finding as “blowing everyone’s minds.”

She gleefully explained "flash" radiotherapy, which in just-published experiments with mice, delivered several minutes’ worth of radiotherapy in less than one second – and with none of the harm to healthy tissue that would be expected with such a massive delivery.

“Flash seems to behave differentially for good cells and bad cells, and that’s not something we’ve seen before. It could be a true paradigm change for cancer treatment,” said Zeng, an associate professor of radiation oncology at the University of Washington School of Medicine.

Radiation oncologists heed a therapeutic ratio: essentially, the higher the dose, the greater the chance of an effect – both curative and toxic. So for the past two decades, the field’s researchers have been consumed with making the beams of energy conform more tightly to patients’ tumors, Zeng said. Instead of the “big rectangular beam” of 1985, today’s radiation energy comes from myriad angles and is shaped like your three-dimensional tumor to limit injury to the healthy surrounding tissue.

The new finding, however, allows Zeng to ponder whether flash might render the concern of collateral damage irrelevant.

“If flash enables us to give more radiation and not cause side effects, we could theoretically give a lot more, and likely do a better job of killing tumor cells,” she said.

Flash is made possible by extremely high electrical current generated by giant cyclotrons, which are far more powerful, and rarer in number, than linear accelerators used for most cancer treatment. Flash's main difference is not the dose it delivers, but the dose rate.

How can flash radiation spare healthy cells and have the same desired effect on tumor cells? Theories exist – notably involving flash energy’s enormous, instantaneous consumption of oxygen – but no one can say with certainty.

The promising technology has immediacy for Zeng because she has access to cyclotrons at UW Medical Center – Montlake and at the Seattle Cancer Care Alliance Proton Therapy center.

“The cyclotron at UWMC can generate protons at more than 100 Gy (Gray, the standard measure of radiation dose) per second in mouse-model studies,” she said. “We’re starting our own experiments to hopefully better understand flash radiation’s effect on tumors. We’d hope to start testing the radiation in combination with chemo and immunotherapies that are often employed.”

For now, though, she is savoring flash's mystery.

“I’m a pragmatist. I want to cure cancer, but I’m comfortable not knowing exactly how I am curing the cancer.”