A new study will eventually enroll 800 mothers to study the practice's effectiveness. 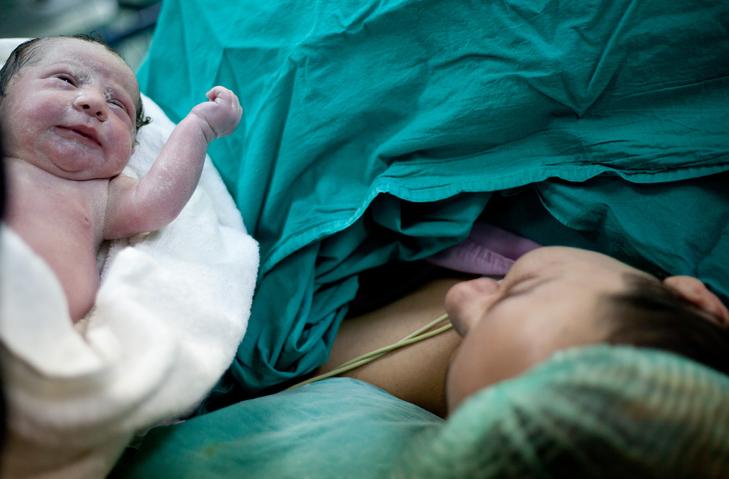 Getty Images
More mothers are choosing to wipe their babies with vaginal fluid to boost the newborn's microbiome.

After giving birth, perhaps the last thing most moms likely want to ponder is their vaginal microbiome.

In fact, more U.S. moms, especially the 30 percent who have cesareans, are concerned that their babies get exposure to the vaginal microbiome at birth. A small number of women are now asking, in the event of a c-section, to have their newborns wiped down with swabs soaked in their vaginal fluid – obstensibly to lower risk of developing obesity, diabetes, asthma or autoimmune diseases later in life.

Our bodies are home to about 100 trillion bacteria and other microbes, collectively known as the microbiome. Recent research shows that babies born by cesarean have slightly higher rates of some auto-immune diseases such as diabetes and asthma, leading to speculation that babies born by c-section miss out on the benefit of passing through the birth canal and being "seeded" with more of the mother's microbiome.  A more diverse microbiome, including mother-child skin contact and from breast milk, enhances protections against disease, say proponents of vaginal seeding.

The baby’s microbiome “not only affects your digestion, but your immune system,” said Mary Lou Kopas, head of midwifery at UW Medicine. “This may be why breast-fed babies have lower rates of type 1 diabetes, asthma and allergies, which are auto-immune diseases.  We do know that breastfed babies have a more diverse population of gut flora, and in particular more of the beneficial Bifidobacterium species, than do formula-fed babies.”

Kopas recalled one mom who had a difficult delivery and had to abandon most of her birth plan. But one thing that happened, at her insistence, was the vaginal wipe-down for her newborn, Kopas recalled. She said the doctors told her, “We don’t recommend it, but we won’t stop your husband if he wants to do it.”

That mom, Frances Arnold, recalls that day 14 months ago, when her daughter Izabelle Pearl was born, very well. Izabelle was born six weeks early, and doctors determined Arnold, a dietician, was suffering from preeclampsia, a condition characterized by high blood pressure and possible organ failure. Arnold's birth plan went out the window, as doctors performed an emergency cesarean. However, Arnold insisted that Pearl was wiped down with vaginal fluid collected before the operation.

"I remember pushing hard for the vaginal wipe, and at first the doctors said "no," but finally they relented," Arnold said. "I know the research, and I know the critical role that the microbiome plays."

In general, the American College of Obstetricians and Gynecologists frowns on women trying to do the baby's wipedown themselves unless it is as part of a research study. It recommends that providers discuss the pros and cons of the practice before  the mother's labor starts. Two studies launched this year may provide more data on the benefits of vaginal wipes.

Kopas doesn’t see the downside so long as there is no contraindication to the baby being born vaginally.

“It may sound weird, but the normal biological process is for the baby to pass through the birth canal and that is likely part of the normal seeding of the newborn’s skin, and upper respiratory and GI tracts.”

However, there are some harmful blood-born infections that can pass from mother to baby during birth, such as HIV, hepatitis and herpes. Newborns also occasionally contract an infection caused by normal vaginal flora infecting the uterus during labor, Kopas noted, adding, “for this reason, there is concern about the safety of this practice and we caution that we really do not know if there is benefit or harm.

“There will need to be some solid evidence from studies before it would be an approved hospital policy. However, consumers at some level are ahead of that research and pushing for this,” she said. “We do know that breastfeeding and immediate skin-to-skin time with the mother is beneficial to the baby in many ways."

The first FDA approved study launched at Ivona Women’s Hospital in Virginia will eventually study 800 mothers, with half receiving vaginal wipes and half having just a damp cloth with saline solution wiped on their newborns. Researchers will then study the health of the babies over the next three years.  A similar study is starting at the Icahn School of Medicine in New York.