UW Medicine news was No. 3 most popular on EurekAlert! in 2017

UW Medicine news was No. 3 most popular on EurekAlert! in 2017 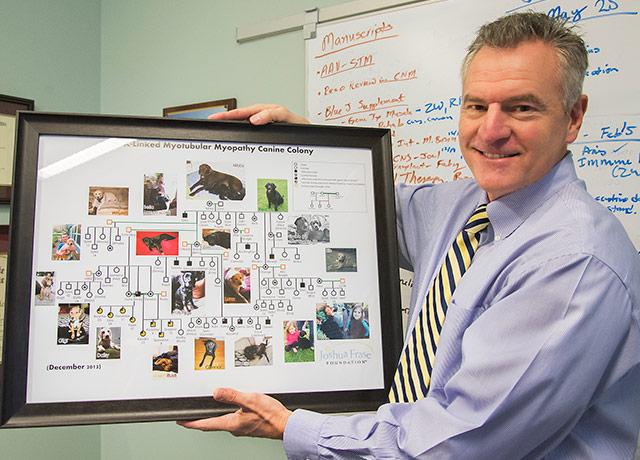 UW Medicine’s Institute for Stem Cell and Regenerative Medicine (ISCRM) led a multi-institutional research effort in the United States and France to sucessfully treat a muscle wasting disease in dogs called myotubular myopathy. This news is the No. 3 most clicked-on release on EurekAlert!, an online global news service operated by the American Association for the Advancement of Science.

Researchers replaced a mutated gene responsible for the neuromuscular disease with a healthy gene. Their results were published in Molecular Therapy.

Puppies with this naturally occurring mutation exhibit several features of babies with the same defective gene. The rare disorder, which affects only males, causes fatal muscle wasting. Both dogs and boys with the disease typically succumb in early life due to breathing difficulties.

"This regenerative technology allowed dogs that otherwise would have perished to complete restoration of normal health," said Martin K. "Casey" Childers, professor of rehabilitation medicine at the University of Washington School of Medicine and ISCRM co-director.

This study was conducted in collaboration with Harvard University, Medical College of Wisconsin, Virginia Tech, INSERM, and Genethon.

More than 32,000 news releases were accepted onto EurekAlert! in 2017, following EurekAlert eligibility requirements. This was a nearly 9 percent increase from 2016, according to the news service.

The annual EurekAlert! trending news release list was compiled based on the number of public and reporter visits to news releases between Dec. 16, 2016, and Dec. 15, 2017.