Appliance is designed to cinch the mitral valve so it closes fully, preventing backflow of blood that adds to heart-failure patients' fatigue. 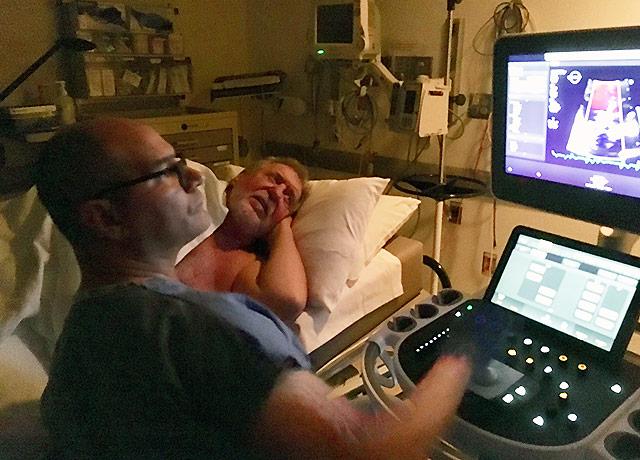 Ed Ward, a retiree living in Twisp, Washington, is the Pacific Northwest’s first recipient of a collar-like device implanted in the heart to improve its pumping efficiency. He was at UW Medical Center on May 16 for his 30-day checkup post-procedure, and the device appears to be having the desired effect.

"I'm happy with the results," said Ward, 72, a patient in a study of the device’s feasibility. UW Medicine’s cardiology program is among 15 taking part nationwide, and the only one west of Utah.

Ward was diagnosed with heart failure in September 2017. His health and energy had deteriorated such that “I thought I was a goner,” he said. For one three-week span, he added, he slept little for fear that he wouldn’t awaken.

A referral led Ward to Dr. Creighton Don, the cardiologist who implanted Ward’s device April 19. He described how Ward’s condition had caused his heart to lose some of its pumping capacity.

“Heart failure dilates the heart, and that stretches out the annulus, where the mitral valve is. The valve gets too stretched to close tightly, which allows blood to back-flow into the atrium instead of getting pushed to the aorta and out to the body. Thus, less oxygen-enriched blood is flowing, which can cause a person to feel fatigued and out of breath.”

For those patients, surgery is currently the only option, and many are too sick to be operable. The device being tested is the first catheter-based repair system to treat the condition. Its manufacturer, Ancora Heart, trained Don to perform the repair and sent proctors to oversee Ward’s procedure.

The device is designed to be inserted into the patient’s femoral artery and directed up to the heart. There it is threaded around the inside of the annulus and cinched like a belt, pulling the mitral valve’s leaflets back into proximity so they can close fully and halt the leakage.

Ward was back home in Twisp two days after his procedure. Had he undergone surgery – which was an option but one that carried greater risk, given his other health conditions – he would’ve spent five days in the hospital and would face a much longer recovery.

If this trial is successful, Don said, it would give cardiologists a second approach to dealing with faulty mitral valves.

“The potential advantage of this repair is that you’re maintaining the patient’s original tissue, so the fix could potentially be life-long. A similar catheterization repair involves replacing the entire mitral valve with a bioprosthetic valve, which has a lifespan of about 10 years and ostensibly would need to be replaced,” Don said.

The national trial seeks 35 subjects, and Don expects to evaluate two or three more patients for the procedure at UW Medicine. If the clinical trial is extended, that number could increase.