The idea is to create a therapy involving swabs of an entire healthy skin microbiome, as an alternative to antibiotics. 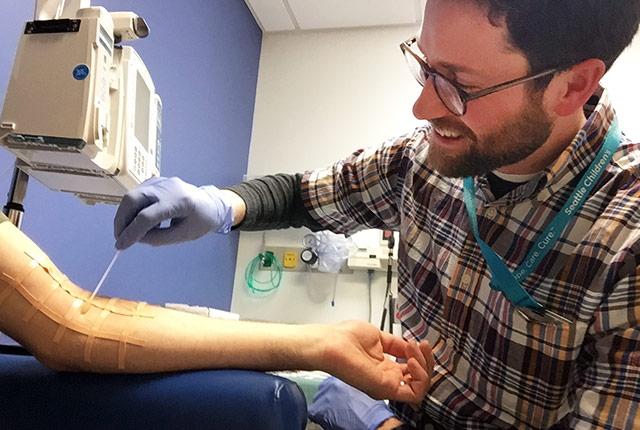 Know someone with a bad case of acne? Someday, perhaps, physicians will treat it with swabs of healthy skin microbiome rather than with an antibiotic.

The idea parallels the highly successful strategy of transplanting fecal microbiota to treat Clostridioides difficile (C. diff.), a stubborn bacterial infection of the colon. By introducing healthy microbes into an environment that is out of balance, doctors restore bacterial equilibrium.

Antibiotics “shock” the bad bacteria thought to be major players in the skin condition, Perin said. “The downside is that you have to keep doing these treatments over and over because you’re not really treating the underlying problem.”

There’s an emerging appreciation, he said, for the idea of modifying an unbalanced skin microbiome “without just blasting away at the bacteria with antibiotics. What if we could colonize with the right bacteria instead?”

Much of the research in that vein (from pharmaceutical and cosmetic makers) has focused on developing probiotic substances to guide a skin microbiome toward a better balance. Another current line of inquiry is to refine a single bacterial strain with healthy characteristics and smear that on an individual.

Perin is exploring a grander idea: Take an entire bacterial community – dozens of distinct microbes, some mutually dependent – from a healthy person’s skin and swab it onto skin inflamed with acne, eczema or another condition, to provide relief.

There are formidable obstacles to success:  Previous research has shown that skin microbiota resist change, and that a person’s skin microbiota, even to their distinguishing strains of DNA, tends to stay consistent for years.

Nonetheless Perin and colleagues just published (in PLOS) a proof-of-concept pilot study of such a transplant. The investigators showed it was possible to move multiple live bacteria from the crook of subjects’ arms to their backs.

“Of the unique arm species, we moved a significant fraction,” Perin said. He noted limitations to the findings but came away hopeful that conducting the experiment again, with a slightly different protocol, would be worthwhile.

He reasoned that, if he were to try to create a healthy forest from scratch, he’d want to do more than transplant pine trees, for instance. “I’d think that transplanting an ecosystem – one of every species of tree from a healthy forest – would have more long-term durability. At this point, it’s just conjecture,” Perin allowed, “but that’s where I’m coming from.”