A Sept. 16 scientific program will be held in remembrance of Dr. George Stamatoyannopoulos to discuss cell and gene therapy, and other fields of his interest. . 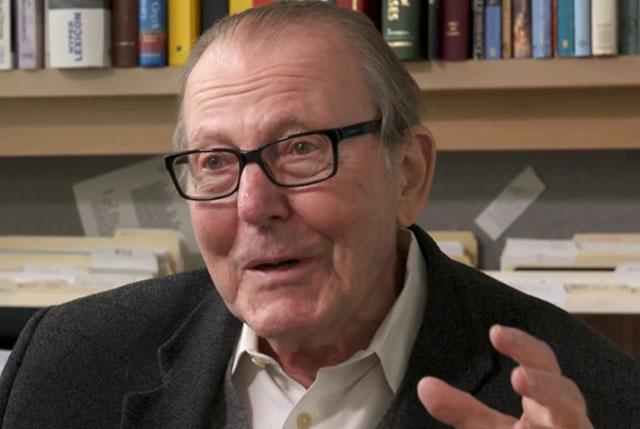 ASGST
In a still from a 2017 American Society of Gene and Cell Therapy, Dr. George Stamatoyannopoulos talks about the importance of giving a forum to young scientists to hear their ideas.

The memory of the late George Stamatoyannopoulos, a research pioneer who made many contributions to medical genetics and to cell and gene therapy, will be honored in Seattle Sept. 16 with a day-long scientific program.

The George Stamatoyannopoulos Memorial Symposium will include many noteworthy researchers speaking briefly on a variety of topics related to his interests, which ranged from hemoglobin biology to classical Greek history and philosophy.

Stamatoyannopoulos was born in 1934 in Athens, Greece.  From his childhood through his teens, his country was in turmoil from the Nazi occupation, famine and civil war, which scattered his family. After the war, he studied the classics and science, and then entered medical school at age 17.

After graduation, he researched blood disorders, particularly anemias. His investigations uncovered links between resistance to malaria and thalassemia and sickle cell traits.  His theories on treating sickle cell disease and thalassemia led to international efforts to try to cure these disorders with gene therapies, and more recently, gene editing.

George Stamatoyannopoulos was head of the Division of Medical Genetics in the Department of Medicine from 1989 to 2005. Nationally, he served as president of the American Society of Hematology.  Among the early advocates for research on gene therapy, he became the founding head in 1996 of the American Society of Gene and Cell Therapy in 1996. He was also the respected and dedicated mentor to many scientists and clinicians as they began and established their careers. He died in June of 2018; his gravesite is in Kyparissia, Greece.