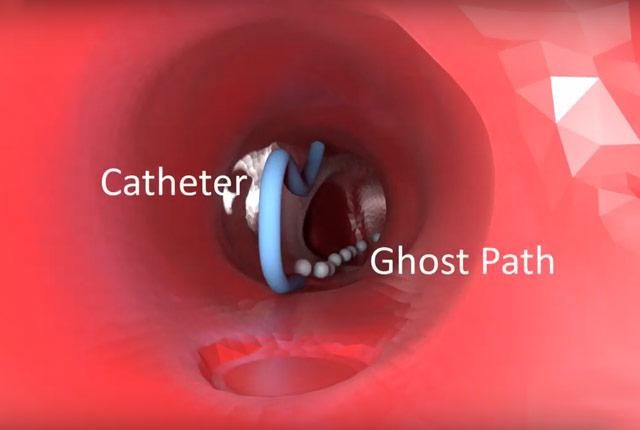 UW Medicine
A virtual-reality depiction of a catheter navigating blood vessel. With a VR headset, this would be 3D.

“When you put the (VR) headset on, you have a giddy laugh that you can’t control – just sheer happiness and enthusiasm. (I’m) moving up to the mesenteric artery and I can’t believe what I’m seeing,” he recalled.

The experience reminds him of “Fantastic Voyage,” the ’60s-era sci-fi film about a submarine and crew that are miniaturized and injected into a scientist’s body to repair a blood clot.

“As a child, and today, I’ve been amazed at the premise that one day you can swim around inside someone’s body. And really, that’s the sensation: You’re in it,” he said.

Interventional radiologists use catheters, thin flexible tubes that are inserted into arteries and veins and steered to any organ in the body, guided by X-ray visuals. With this approach, they (and cardiologists, vascular surgeons, and neuro-interventionalists) treat an array of conditions: liver tumors, narrowed and bleeding arteries, uterine fibroids, and more.

Monsky and two collaborators have pioneered VR technology that puts the operator inside 3D blood vessels. By following an anatomically correct, dynamic, 3D map of a phantom patient's vessels, Monsky navigates the catheter through junctions and angles. The catheter's tip is equipped with sensors that visually represent its exact location to the VR headset.

It’s a sizable leap forward from the 2D, black-and-white X-ray perspective that has guided Monsky’s catheters through vessels for most of his career.

He recently presented study findings that underscore VR’s value: In tests of a phantom patient, VR guidance got him to the destination faster – about 40 seconds faster, on average, over 18 simulations – than was the case with X-ray guidance.

More critically, since VR employs a magnetic field to visualize the catheter, it greatly reduces and may eliminate the need for the radiation exposure that comes with X-ray navigation.

“We always try to minimalize every patient’s exposure, but these complex procedures are currently performed with X-ray exposure to the patient, in the name of curing their disease. (With VR), we think we can come away from a lot of that – hopefully all of it,” Monsky said.

The tests provided proof of concept, but the idea still must be scrutinized and approved by the U.S. Food and Drug Administration before it could be deployed with actual patients.

He thinks VR’s small footprint also could make interventional radiology portable. A headset and electromagnetic tracking system could fit in a roller bag and travel to remote areas far from the traditional setting of an urban hospital angiography suite.

“Centers that can’t afford that overhead would have access to this treatment technology,” said Monsky. He directs interventional radiology at Harborview Medical Center, which draws patients from throughout the vast Pacific Northwest for emergency and elective care.

His partners in this effort are Dr. Steve Seslar, a specialist in cardiology and electrophysiology, and Ryan James, technology developer and software engineer. The three worked through CoMotion at the University of Washington to create Pyrus Medical, a startup that will commercialize the technology.

“All the information you’re getting from the sensors on the catheters can be used in different ways. We can get positional information (about physiology and anatomy) as we’re doing our procedure … and we can learn from how those catheters move. Ideally that positional information could be fed into tele-robotic systems so that, just by turning my catheter here, in some room across the globe, the catheter is moving in that direction in a person in need there.”

Watch our accompanying video below; download it here for broadcast and web use.