Survey draws a bead on the experience of DIY dialysis

Survey draws a bead on the experience of DIY dialysis

At-home dialysis is a U.S. priority to stem the growing burden of care that involves people with chronic kidney disease. 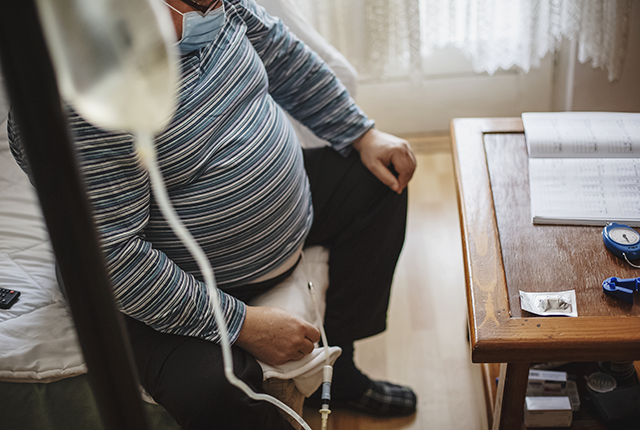 Getty Images
A senior man connects a catheter for peritoneal dialysis at home.

As members of the aging U.S. populace hang onto habits that encourage hypertension and diabetes, the prevalence of chronic kidney disease will keep spiraling upward. So, too, will the numbers of people who ultimately spend big chunks of their lives getting dialysis treatment.

Among the half-million Americans who currently undergo dialysis, most (88%) make appointments three times a week at centers where well-trained technicians ensure that catheters safely connect patients’ bodies to blood-purifying machines. Nurses are present to resolve medical problems that might arise.

The other 12% of patients on dialysis – folks embracing independence – hook themselves up to machines at home and on their own schedules. For this group, UW Medicine nephrologist Matt Rivara and colleagues recently developed a survey to better understand what functions well and what does not in terms of their patient experience. (survey in English; in Spanish)

“If you’re doing dialysis at home, you have much more flexibility with your schedule. Some systems even let you dialyze while you sleep,” Rivara said. “But you also have more ownership of the details and logistics of treatment. If the machine has an alarm that goes off or there’s a problem with the catheter between your body and the machine, there’s no nurse or technician at your bedside. You need to know who how you’re going to address that and who you’re going to call.”

Rivara’s new survey aligns with a U.S. mandate to broaden self-serve treatment among dialysis patients. This point was emphasized in a 2019 directive published by the Department of Health and Human Services. A bullet point read: “We aim to have 80 percent of new American (end stage renal disease) patients in 2025 receiving dialysis in the home or receiving a transplant.”

As it turns out, people who undergo peritoneal dialysis at home cost healthcare systems about one-third less than those who get in-center dialysis.

“There’s recognition that this growing population is consuming a lot of healthcare systems’ resources, so we’re doing what we can to reduce costs,” Rivara said.

Since kidney-transplant volumes are relatively static year-to-year, the real opportunity for change lies with increasing home dialysis. Rivara’s new survey is part of the effort to overcome decades of the inertia of in-center hemodialysis being the default option for both clinicians and patients.  In fact, before his team developed this new survey, the only existing questionnaires were explicitly for in-center dialysis patients.

“Some nephrologists are unfamiliar with how to work with patients who dialyze at home,” he said. “Care providers need to be brought up to speed on current technologies for at-home dialysis so they can describe options during conversations with a patient when end-stage disease is on the horizon.”

“Physicians often focus attention on lab results and physical exam findings, but patients focus on things like quality of communication with the clinician, the turnaround time for lab results, and the cleanliness of the clinic.”

Caregivers need to better tune in to patients’ priorities because those are increasingly associated with case outcomes, Rivara said. By accurately collecting patients’ experience of care, healthcare organizations can improve care in ways that resonate for patients.