Rupture, a sentinel event for stroke and heart attack, is associated with protein depletion in a specific structure, according to UW Medicine-led research. 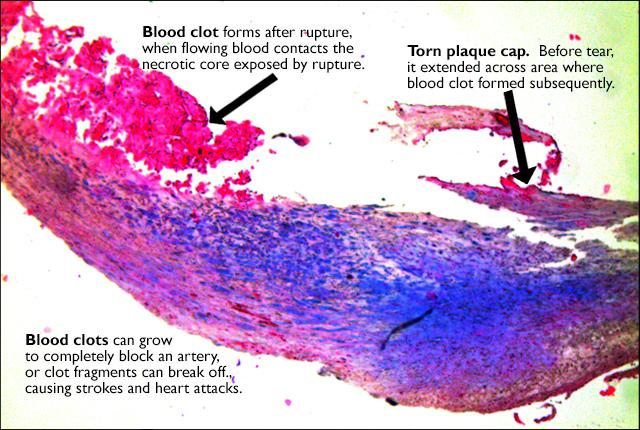 Plaques that build up inside arteries heighten a person’s risk for two grave events: heart attacks and strokes. But arterial plaques are not equally dangerous; in fact, their compositions are highly variable: Those with relatively more smooth-muscle cells and collagen tend to be stable, while those composed more of fat and cholesterol are rupture-prone.

Statins that people take to combat atherosclerosis are intended to not only reduce plaque mass, but also – and equally important – to make its composition more stable, as plaque rupture is the mechanism that often precipitates these grave events.

New research sheds light on what causes plaques to rupture. The findings, published July 30 in Circulation Research, were led by investigators at the University of Washington School of Medicine.

Previous literature had associated rupture with a dearth of collagens, in particular, amid the slurry of substances that compose plaques, said Dr. David Dichek, a senior author on the paper.  The new study found, however, that rupture was significantly related to the depletion of proteins in the basement membrane, a thin layer that surrounds cells that cover the plaque.  Loss of these cells weakens the plaque structure and leads to rupture.

The investigators used proteomics instruments to identify proteins and biochemical processes associated with plaque rupture. In a mouse model study, aortic plaque rupture was induced by adding a gene that increases protease activity in plaques. The findings were reproduced and validated in two cohorts of human carotid-artery plaques.

Basement-membrane proteins were substantially reduced in regions of human carotid arteries that contained ruptured plaques. Collagen levels, by contrast, were minimally changed in ruptured plaques in both mouse-model and human studies, he added.

“We think that enzymes called proteases, which break apart proteins, are involved in breaking the basement-membrane into smaller fragments that get washed away,” Dichek said.

Protease inhibitors, drugs used for a variety of medical conditions, have been explored as protecting against plaque ruptures. When collagens were identified as a critical vulnerability in plaque rupture, inhibitors of enzymes called metalloproteases were suggested as preventative medications, but their toxic side effects ended that line of inquiry.