She once thought becoming a doc wasn't possible

She once thought becoming a doc wasn't possible

Dr. Jamie Wright, diagnosed with hydrocephalus as an infant, begins her second year as a UW Medicine neurology resident. 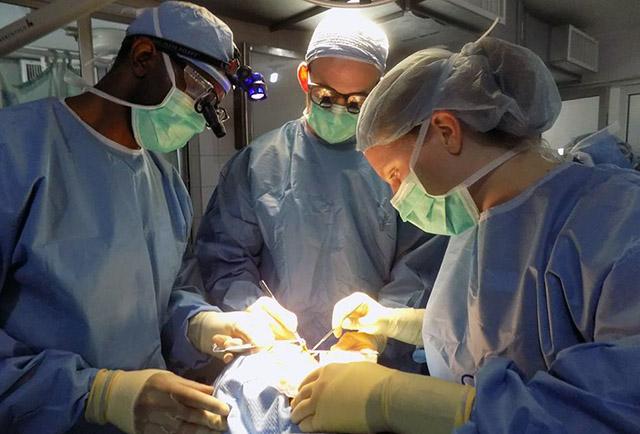 In 2015 Jamie Wright assisted Drs. Morris and Sandberg with the treatment of Haitian children with hydrocephalus

A family photo shows a toddler held in her father’s arms, asleep on his shoulder. At only 20-months old, his daughter had just undergone her first surgery for hydrocephalus, or excess fluid in the brain.

Over the next three decades, 16 more brain surgeries would follow.

During that time, Jamie Wright would complete an M.D./Ph.D. program at McGovern Medical School in Texas and be selected for the University of Washington School of Medicine's neurology residency program.

“I think she’s a good addition to the program,” said Dr. Michael A. Williams, director of the UW Medicine Adult and Transitional Hydrocephalus Clinic and professor of neurology and neurological surgery at the UW School of Medicine.  “She’s got an M.D./Ph.D, something not a lot of young people with hydrocephalus have been able to do.”

Her decision to pursue medicine as a career was in some ways a surprise even to her.

As she was growing up, classmates would sometimes joke:  “Oh, a future neurosurgeon or brain surgeon,” in part because of her knowledge of living with a brain disease.

In college, she was the one non-premed major among her friends. She started out majoring in molecular biology. That changed in her junior year, when she decided to pursue medicine.

Her hesitancy about becoming a doctor was based in part on her own experiences, which included encounters with physicians who sometimes seemed to blow off her symptoms.

Hydrocephalus is a chronic disease. The tubing and drainage system that keeps the cerebrospinal fluid surrounding the brain in balance sometimes fluctuates between too much and too little fluid. The implanted treatment device, called a shunt, isn’t always able to keep that delicate balance properly in check.

That inconsistency can unpredictably trigger several health issues caused by enlargement of the brain’s ventricles. These can include headaches, nausea, vomiting and fatigue. Sometimes it takes multiple tries to reach what Wright calls “the Cinderella fit” of a drainage setting.

“For me, unfortunately, like a lot of adults with congenital hydrocephalus, I have headaches pretty much everyday,” she said. “Headaches are part of my life.”

When she became too old to be seen by her pediatric neurosurgeon, she was cut adrift. She was left scrambling to find new medical services as an adult.

“We need more doctors who specialize in hydrocephalus in adults,” she said. “There aren’t that many.”

Even as she excitedly settled into the neurology residency program, she unexpectedly faced a new set of challenges.

Year one of a residency program comes with the self-imposed pressure to do well, to prove your value to the program and your medical proficiency as a physician.

Thrown into the mix of what can be 18-hour days, she battled a new round of medical problems of her own: a COVID diagnosis and a shunt malfunction that caused worsening headaches and nausea with a jolt of pain every time she moved or stood up. She required two additional neurosurgeries to monitor the pressure inside her brain, and then to replace the shunt or tubing system that begins in her brain and ends in her lower body to drain excess cerebrospinal fluid.

She worried that her medical absences recovering from COVID and her surgery would shift additional workloads to her fellow residents, who were working through a training rotation in internal medicine.

“Every time I started to stress over ‘How are you guys going to cover my absence?' Dr. Kenneth Steinberg, who directs the internal medicine residency program, would respond: "That’s for me to worry about. Just get better.'”

Fellow residents visited her when she was hospitalized and organized meal trains for her.

“As hard as it’s been, I felt very well supported,” she said.

There is one more important support. Her short-haired American tuxedo cat, Abigail Bagel, found at a rescue, somehow always knows when her human companion needs an extra cuddle.

Wright has been involved in hydrocephalus issues for a number of years. While in graduate school, a neurosurgeon in Houston invited her to join two medical trips to Haiti where health-care workers were treating children with hydrocephalus.

“He wanted to give me an opportunity to see what hydrocephalus looks like in the underserved population,” she said.

Left untreated, babies' heads can enlarge, thereby putting pressure on their brains. She assisted in surgeries to relieve that pressure.

“Some of these children have massive heads from being untreated. It’s heartbreaking, but really rewarding to be able to do something about it.”

Having a disability or disorder can sometimes lead physicians to practice in that specialty, Williams said.

“It becomes a motivator and provides a source of empathy that not everybody else may have,” he added.

In her off hours, Wright sometimes talks with the parents of newly diagnosed children referred by the national Hydrocephalus Association.

“It’s nice to be able to provide some reassurance, to tell them about my own experience. Just sharing that I’m a doctor and have hydrocephalus eases some fears,” she said.

“I’m especially thankful to share that with scared parents who are hearing a lot of speculation of what their child will not be able to do, and to tell them there’s still a lot of possibilities despite this diagnosis.”

Hydrocephalus is impaired circulation of spinal fluid within the brain. It causes enlargement of the brain’s normal spinal fluid cavities, called the ventricles.

The treatment is a shunt, a permanent surgically implanted internal drainage system that has the purpose of draining enough, but not too much, spinal fluid. It’s possible to drain too much spinal fluid or to not drain enough.

The flow through modern shunts is regulated by a spring valve mechanism that can be adjusted to make it easier or harder for spinal fluid to flow through, similar to adjusting the tension on a screen door.

That means the shunt can be adjusted to make it easier to open or harder to open. The tendency for shunts to drain too much when the patient is upright can cause headaches. Some shunts have a second valve mechanism to counteract the effect of gravity when a person is upright.