Scientists make drug glow to watch it move in the body

Scientists make drug glow to watch it move in the body 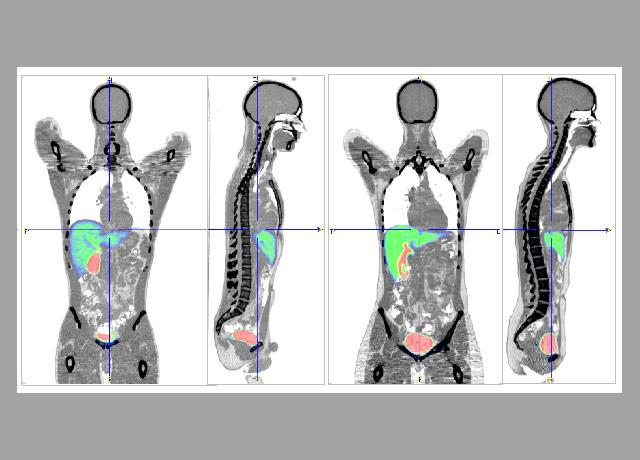 Department of Radiology, University of Washington School of Medicine
The blue-green (liver) and pink (kidney, above, and bladder) denote different levels of radio-labeled rosuvastatin in two subjects.

UW Medicine’s radiology team last month created a novel imaging agent and, in an expansive team effort, performed a first-in-human PET/CT imaging study to observe how a statin drug distributes and accumulates in the body.

Spoiler alert: It’s mostly in the liver, kidneys and bladder.

The statin – rosuvastatin (Crestor), a cholesterol-lowering drug – was changed at the atomic level with the addition of carbon 11, a radioactive isotope. The isotope didn’t alter the drug’s action in the body, but it enabled scientists to witness its transport through the organs of human subjects.

“The beauty of the PET scan is that we can follow quantitatively how much of the drug goes in and out of various organs,” said Steve Shoner, the radiology scientist who, with colleagues, made the rosuvastatin doses glow by inducing a sequence of chemical changes.

The experiment was designed by Jash Unadkat, University of Washington professor of pharmaceutics. He and a team have developed an in vitro model, one of several advancing in parallel at the UW, in which human organ-tissue samples are grown in a lab to observe how they respond to drugs.

The impetus, Unadkat said, is to create tools that more accurately inform pharmaceutical companies how new test compounds will move and accumulate and respond to other drugs.

Currently drug manufacturers’ understanding of medications’ effects are mostly based on test-tube lab tests and animal tests. Drug development and testing is hugely expensive and slow. Small-scale models such as Unadkat’s, if they are proven valid, could result in more effective drugs being produced more quickly.

“I think we are unable to predict well the drug concentration at the intended site. Is it enough – efficacy – or too much – toxicity? That’s one of our goals: to better predict drugs’ concentration and duration in tissues.”

The PET/CT experiment was intended to validate the predictability of Unadkat’s in vitro model. It had indicated that rosuvastatin would be transported into and out of the liver – and that the process would be slowed by giving the subjects a second drug, cyclosporine, an immunosuppressant that shuts down the transporters that move rosuvastatin through the liver.

PET/CT involves the use of two technologies, positron emission tomography and computed tomography, to capture sequences of patient scans. It is commonly used to identify cancerous growths and to track how tumors respond to chemotherapies.

With PET/CT, the radioactive element is put inside the person and observed from the outside. Radioactive atoms emit positrons as they decay, and the decaying positrons put off gamma rays, which are visible to the PET scan.

The subjects in the test were not endangered by the rosuvastatin’s radioactivity because carbon 11 disintegrates into harmless material in less than two hours.  Radioactivity is so highly detectable that the physical quantity of carbon 11 in the subjects was 1 or 2 micrograms, or “less than one-thousandth of what you’d take in a 10 or 20 milligram pill,” Shoner said.

He and Unadkat were assisted by David Lewis, Jean Lee, Mark Muzi, Jeremy Iman, Missy Wanner and imaging technologists in radiology; Scott Lee in gastroenterology; Matthew Pennington in anesthesiology and pain medicine; and Sarah Billington and others in Unadkat’s pharmaceutics laboratory.