Saved by a fall – and a first-anywhere heart procedure

Saved by a fall – and a first-anywhere heart procedure

A cut to her aortic valve, via catheter, pulled UW Medicine patient Debbie Davis out of a tough spot. 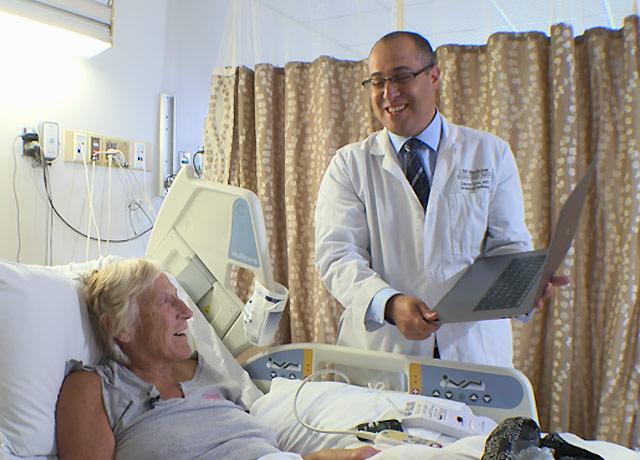 Come September, when Debbie Davis returns to work as an aide at Morgan Middle School, she’ll have an incomparable “what I did last summer” story to share: A simple fall led her to one pioneering doctor who probably saved her life.

In early June, Davis stumbled at her Ellensburg, Washington, home and aggravated an old hip injury. At the local hospital, doctors’ workup showed that Davis’ heart was failing badly. She was referred to UW Medicine in Seattle, where cardiologists discovered that her calcified aortic valve needed replacing immediately.

Normally this would be a straightforward procedure. A cardiologist can implant a mechanical aortic valve in less than an hour, using a catheter to thread it up through the artery in the groin and expand the cylindrical device within the circumference of the failed valve.

But there was a wrinkle: Davis, 66, had a congenital condition that had left her aortic valve underdeveloped: It was bicuspid – that is, with two leaflets that open and close to let blood through instead of the normal three-leaflet (tricuspid) valve.

Bicuspid aortic valves are poor candidates for the catheter-based implants because the replacement device doesn’t sit well within the two-leaflet structure; there’s a greater chance it will not expand well, leak around its edge and fail early. People with failing bicuspid valves are usually directed to open-heart surgery, in which the entire existing valve structure is removed and a new device is sutured in its place.

But Davis couldn’t have open-heart surgery because recovery from that requires patients to be up and moving around – and her hip repair would preclude that.

A dilemma emerged: How to proceed?

Dr. Danny Dvir, a UW Medicine cardiologist with considerable experience in valve replacement, posed an idea to colleagues: Approach via catheter and cut, with an electrified wire, one of Davis’ two leaflets in half, from stem to tip. This would leave three leaflets, and then the typical aortic-valve replacement could follow. It would be a catheter procedure, not surgery.

“To our knowledge, turning a bicuspid to tricuspid, through a catheter, had never been done,” said Dvir.  He was confident about the procedure, though, because he has performed a similar cut to mechanical valves in the past year.  He posed the idea to Davis, who was game to try.

The two-hour procedure was a success, and the next day she was transferred to Harborview Medical Center to have her hip repaired.

Today Davis is back in Ellensburg, weeding the garden and playing with her dog. “I’m getting around with a walker. It’s going to take time, I know that,” she said.

She looks forward to September. For the past four years she has monitored middle-schoolers at lunch one day a week, a role she loves for the give-and-take with teens who are feeling their oats.

“They’ll wonder, ‘Wow, lady, you’re still here?’” she said with a laugh. “I’ll have a new group of kids, and the school just got renovated, so I might get lost, but at least I won’t have any trouble getting around.”