Organs deep in the ear wither with age, making seniors vulnerable to falls and resulting injuries. 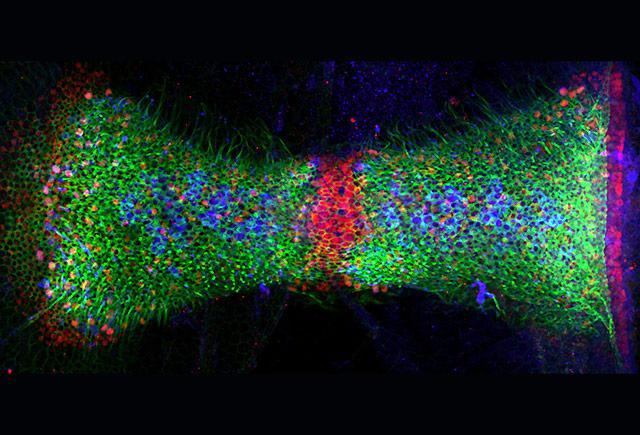 We commonly associate inner-ear structures with hearing, but deep in the ear canal sit tiny organs called crista ampullaris – crista, for short. Aided by millions of sensory hair cells, crista help us maintain our gaze as we move around, like a modern camera’s stabilizer function. Without a healthy population of these hair-like cells, the brain struggles to track our position relative to the surroundings that our eyes and ears perceive.

This deficit contributes to a pervasive health concern for aging adults: falling.

In the United States alone, falls lead to more than 3 million emergency-room visits and 800,000 hospitalizations each year, with associated medical costs beyond $50 billion. Falls cause hip fractures and traumatic brain injuries, often events that compromise seniors’ mobility, productivity, and independence.

Crista are relatively understudied, leaving tantalizing questions about their nature and the hair cells, which we lose with age.

“The crista are very inaccessible, so we know much less about them than we do about the cochlea, for example,” said Olivia Bermingham-McDonogh, a professor of biological structure in the University of Washington School of Medicine.

She and her lab team at the Institute for Stem Cell and Regenerative Medicine want to know whether it possible to recreate the sensory hair cells that help us stay upright and healthy.

They are zooming in on single cells, which involves tagging genetic material with microscopic barcodes. “We separate the tissue into single cells, then look closely at the mRNA,”  Bermingham-McDonogh said. “That allows us to see what genes are expressed and what role each cell is actually playing.”

In fact, at least two types of cells populate the crista: sensory hair cells and support cells that, under certain circumstances, give rise to the hair cells. The gradual loss of hair cells over a lifetime suggests that regenerative capacity fades as we grow older.

Bermingham-McDonogh suspects that’s not universally true. They have observed in mice that a signaling system pathway is active in some, but not all, regions of adult crista. Blocking the pathway appears to help support cells become hair cells.

“We are looking for the population of cells that decreases over time when we block the pathway,” she said.

By studying how some cells become depleted, the team might identify a population of cells that retains the ability to regenerate – and, crucially, to understand why.

– Thatcher Heldring (A longer version of this article appears here.)