Inconsistency and lack of clarity can be ‘implicitly unwelcoming’ to women, study author says. 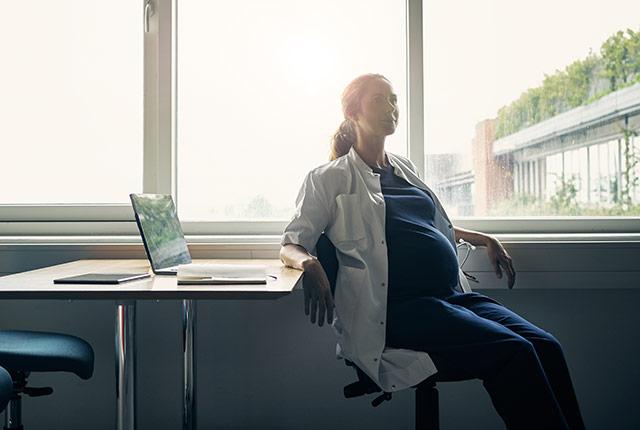 Getty Images
In the study, six weeks was the maternity leave most commonly taken by residents, but leaves ranged from two weeks to 40 weeks.

Women who consider pregnancy during their medical residencies often do so in a vacuum of information about available maternity leave or how the decision could affect the remainder of their training, new research suggests.

Academic Medicine, the journal of the Association of American Medical Colleges, published the paper this month. The lead investigator was Dr. Shobha Stack, an assistant professor of medicine at the University of Washington School of Medicine.

“One of the bigger themes here is gender equity in medicine. The absence of maternity-leave policies can be implicitly unwelcoming to all women. There needs to be acknowledgment – recognition that life happens even while you’re training,” Stack said.

Medical residents routinely work 80-hour weeks. Amid that reality, Stack acknowledged, it can be daunting to consider childbirth, bonding with the infant, trying to physically recover and then resuming such a demanding schedule. Women who make that choice also may face enmity from colleagues who face an unknown work burden to cover maternity leaves.

“When there’s no written policy, the uncertainty causes stress on colleagues who are already working hard. Yet they may not even be affected. They just don’t know,” Stack said.

The researchers gathered data from 804 female residents, representing 78 training programs at six U.S. institutions. Among respondents, 16% (126) were mothers, and of that group, half (63) reported having their first child during residency.

Six weeks was the maternity leave taken most commonly, but leaves among the 63 women ranged from two weeks to 40 weeks, which Stack attributed in part to great variability in financial support among the six training sites in the study: Four provided some leave funding, one relied on the state for leave funding, and one offered no paid leave. Across those institutions, the percentages of paid leave for 12 weeks were 0%, 17%, 30%, 50%, 50%, and 100%.

Seventy-one of the 78 residency programs in the study reported that their maternity-leave policy mirrored that of the school’s graduate medical education (GME) program. This is helpful, but program policies are also needed, Stack said.

“GMEs have very generalized policies, not specific to programs like surgery or pediatrics,” she said. “If you want to know whether you will need to extend your training (after maternity leave), that depends on the specific residency program’s specialty board, not the GME.

“So while the GME can define and potentially ensure lengths of maternity leave, really what you want to know is how that will affect my training: How much longer will it take to finish residency? Will I miss my fellowship date?” Fellowships, Stack added, tend to start in July, almost immediately after residency programs end.

Stack had her second child during her third year of residency – a decision largely attributable to a program director’s support for the idea, she said.

“I was in a large residency program with experience in providing maternity leave. We had enough people to cover inpatient services, and that allowed me to do less-intensive electives and come back gradually after my second child,” she said. “But it’s unclear if other programs have that kind of supportive structure in place.”