Appointment is part of effort to build up Magnuson Park clinic. 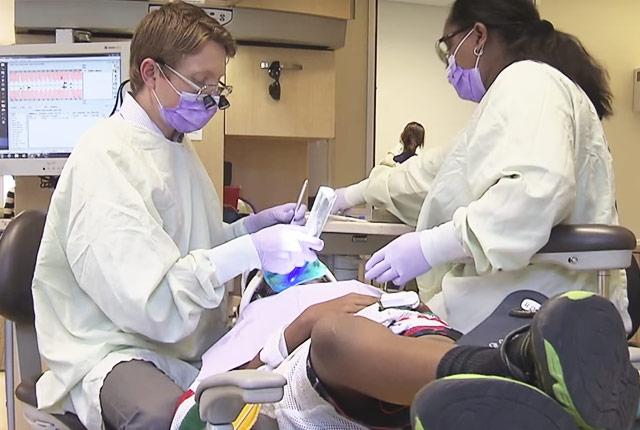 UW360
Dr. Travis Nelson treats a young patient at the Center for Pediatric Dentistry in Seattle.

Travis Nelson, clinic chief of the University of Washington’s Center for Pediatric Dentistry, has been named acting chair of the UW School of Dentistry’s Department of Pediatric Dentistry. The appointment took effect Nov. 1, pending approval by the UW Board of Regents.

In the new role, Nelson will oversee the predoctoral and residency programs, departmental operations, and human resources.

“I am thrilled with the strong commitment that the administration has made to the future of our program, and I am honored to be asked to serve during this critical time in our school’s history,” he said. “We will work together to ensure that the University of Washington continues to serve the children of this state and graduates clinicians who are equipped to care for the most vulnerable patients in our region.”

Nelson received recognition for a clinic he started in 2012 for children with autism, employing behavioral techniques in treating these patients.  Nelson and colleagues published a paper about the clinic in 2017 in the Journal of the American Dental Association.

Gary Chiodo, the School of Dentistry's interim dean, said Nelson would play a key part in transforming the Sand Point clinic that houses the department.  Chiodo said he hopes to increase Sand Point’s existing clinical productivity and add a general dentistry faculty practice clinic there, as well. The Sand Point clinic opened in 2010.

Nelson joined the department and the school’s faculty in 2010. He also holds an appointment on the attending staff at Seattle Children’s Hospital. A 2003 graduate of Walla Walla College, he received his DDS from Loma Linda University in California in 2007, then his master’s degree and certification in pediatric dentistry and a master’s degree in public health from the UW in 2010. He is a diplomate of the American Board of Pediatric Dentistry and has been a co-investigator on seven research grants and a principal investigator on two grants. He has also written or collaborated on more than two dozen journal articles as well as several book chapters and other educational materials.